The U.S. Army Corps of Engineers, Bureau of Reclamation and Bonneville Power Administration signed a joint Record of Decision on Sept. 28, committing the agencies to ongoing operations, maintenance and configuration of 14 federal dams that compose the Columbia River System.

The plan includes actions that support continued, reliable water resource benefits and balances the purposes of the federal dams while specifically supporting ongoing and new improvements for species listed under the Endangered Species Act. The signing of the joint ROD accomplishes a priority item in the Presidential Memorandum on Promoting the Reliable Supply and Delivery of Water in the West issued in October 2018.

The ROD provides the agencies’ reasoning for selecting the preferred alternative published in the Columbia River System Operations final environmental impact statement as the alternative for implementation, and affirms the agencies’ commitment to implement the National Marine Fisheries Service and U.S. Fish and Wildlife Service 2020 biological opinions. 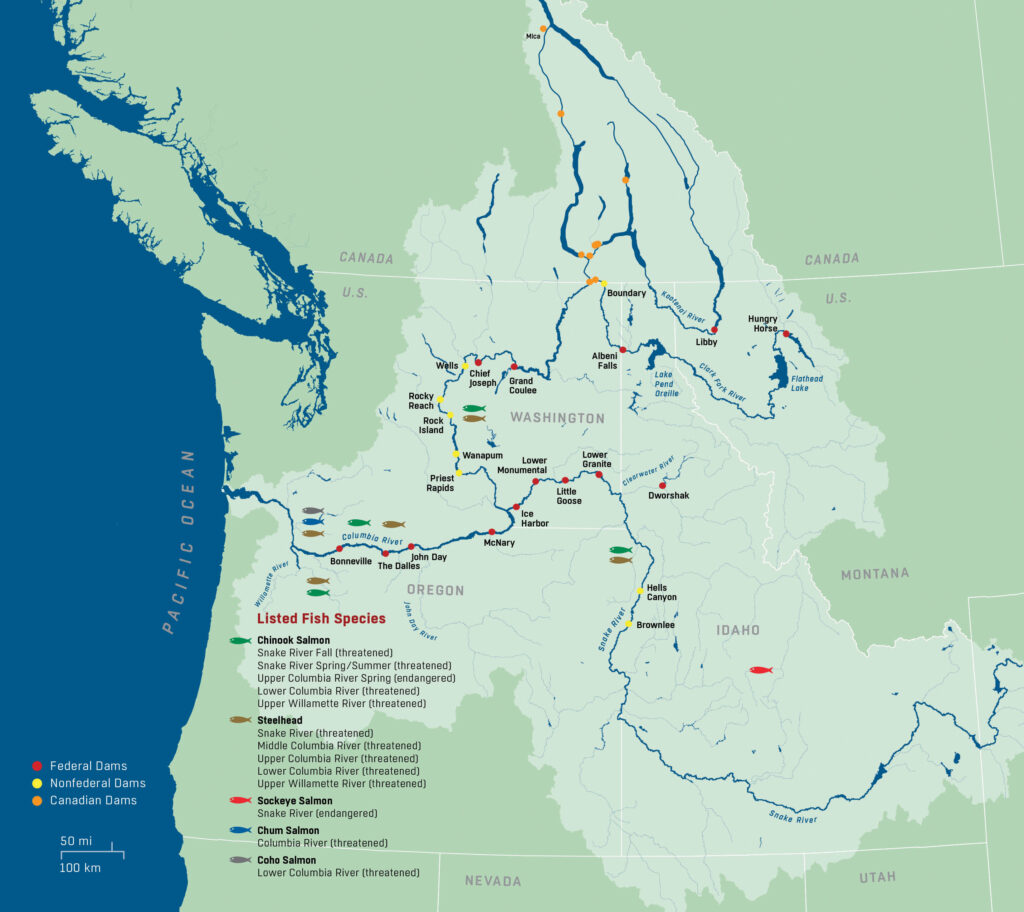 A map of the dams on the Columbia River System.
Image courtesy US Army Corps of Engineers.

One alternative, which would have lowered Lake Pend Oreille by three feet in the summer months, was not chosen as part of the final CRSO plan.

“This selected alternative provides the best balanced and flexible approach to meeting the needs of the human and natural environment in the basin, both now and into the future,” said Brig. Gen. D. Peter Helmlinger, commander of the Corps of Engineers’ Northwestern Division. “Our decision benefits the public interest, treaty resources and iconic fish species of the Pacific Northwest.”

Through her assessment, Reclamation Regional Director Lorri Gray has determined that, “The selected alternative meets the purpose and need of the action and a majority of the EIS objectives, balancing the co-lead agencies’ abilities to meet statutory project obligations while also complying with the requirements of the ESA, Clean Water Act and other applicable laws.”

Key to the EIS process was the identification of mitigation actions to offset adverse impacts of the measures in the selected alternative and operation of the Columbia River System consistent with its congressionally authorized purposes. For example, BPA will fund additional protection and mitigation actions and will include those actions in its existing Fish and Wildlife Program.

“This process reflects our commitment to understanding all of the needs and interests related to the Columbia River Basin,” said acting BPA Administrator John Hairston. “We believe our decision today carefully balances the region’s needs for clean, reliable energy, supports the economic vitality of the communities that depend on the rivers, and includes durable actions that offset impacts on fish and wildlife affected by the Columbia River System.”

The co-lead agencies now are planning for implementation to ensure continued coordinated management of the system in a manner consistent with the selected alternative. The agencies will use the information garnered through the EIS development process to guide future decisions.

According to U.S. Army Corps of Engineers officials, the NEPA process and the EIS were completed with the input and assistance of many cooperating agencies with special expertise and/or authority over the lands and resources evaluated and with robust public and stakeholder engagement. Independent reviews of the EIS were also completed during the process.

The recorded virtual signing ceremony, final EIS and joint Record of Decision are available on the project website: crso.info.