A coalition of environmental groups have requested that the Montana Department of Environmental Quality suspend permits for the Coeur d’Alene-based mining company on the basis of “bad actor” provisions. If successful, the move would hinder the Rock Creek and Montanore mining operations proposed for Northwest Montana.

The proposed Montana mines have long been of interest to Bonner County conservationists, who worry runoff from the mines could affect water quality in local lakes and rivers. 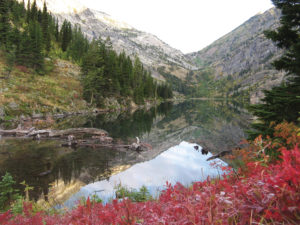 Rock Lake in Montana, near the site of the proposed Rock Creek Mine. Photo courtesy Rock Creek Alliance Facebook.

“The Rock Creek and Montanore mines, which are planned in the heart of a spectacular and ecologically vital wilderness, must comply with the laws that protect Montana’s water, taxpayers, and the communities that are most at risk from mining,” said Mary Costello of Rock Creek Alliance and Save Our Cabinets, two organizations involved in the dispute.

Hecla Mining Company officials, meanwhile, argue that the mines will produce a major economic boost for rural Montana and that “protection of the environment and wildlife is paramount.” What’s more, the company may have some friends in high places. Former Montana Congressman and U.S. Secretary of the Interior Ryan Zinke came out last year in support of the mining projects. And last month, Montana Republican Congressmen Sen. Steve Daines and Rep. Greg Gianforte sent a letter to Zinke and Agriculture Secretary Sonny Perdue supporting the project last month.

“Many in the local community are concerned this work will once again be needlessly delayed, this time by the level of agency prioritization and staffing issues for work on the Biological Opinions,” the letter reads. “We urge you to resolve these challenges as expeditiously as possible.”