The Hive reanimates for Halloween

Much like the zombies in our favorite horror films, the Hive is resurrecting itself from a late summer slumber for a series of amazing shows. Here’s a quick rundown of what to expect: 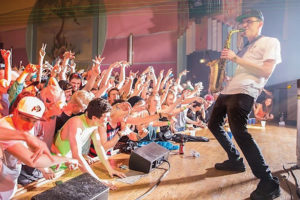 Coming off a huge 2016, GRiZ (or Grant Kwiecinski, to his mom) is showing no signs of slowing down. His latest release, “Good Will Prevail” debuted at #1 on the electronic charts. Just this year alone, the saxophone-toting GRiZ released six singles that claimed the coveted number-one spot on Hype Machine’s most popular charts. Billboard calls GRiZ “brilliant,” while DJ Mag said, “More than all good – it’s great!”

Known for blending an improvised saxophone, guitar vocals and more over booming, dynamic bass lines, hard drops and some of the most creative transitions in the game, GRiZ is rapidly becoming a champion of the live electronic landscape. He’s played at Bonnaroo, Lollapalooza, Electric Forest and Outside Lands – now you can catch him right in our backyard at the Hive.

For the third year in a row, the Hive will provide a safe, rockin’ place for those under 21 to celebrate Halloween in style. Get in your best costumes and get up to get down.

Music will be provided by one of the hottest DJs: Mr. B! 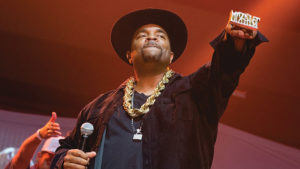 Sir Mix is back in the house for the Hive’s fourth annual Halloween Bash and Costume Contest. This is going to be the biggest and scariest Halloween party in the Inland Northwest.

Known forever more for his double-platinum Grammy-award-winning song “Baby Got Back,” Sir Mix-a-Lot’s last appearance at the Hive sold out, so make sure you get your tickets today. Tickets are $25 in advance or $30 at the door.

Come dressed up to participate in the Costume Contest. Prizes awarded for scariest costume, funniest costume and best couples costume. Doors open at 8 p.m. and the show begins at 9 p.m.

All shows at the Hive (with the exception of the underage Monster Mash) have V.I.P. seating available. Check www.LiveFromTheHive.com for more information.