When William Haberman, managing member of Valiant Idaho, LLC, which owns The Idaho Club, approached Kaniksu Land Trust about placing a parcel of the company’s land in a conservation agreement in the fall of 2021, the goal was to protect the property as open space and natural habitat from encroaching development.

The Moose Mountain parcel is about 75 acres and located on the west shore of the Pack River Delta. Located within a wildlife travel corridor and adjacent to an interconnected system of state and federal lands bordering the Pack River, it is valuable from a conservation perspective. 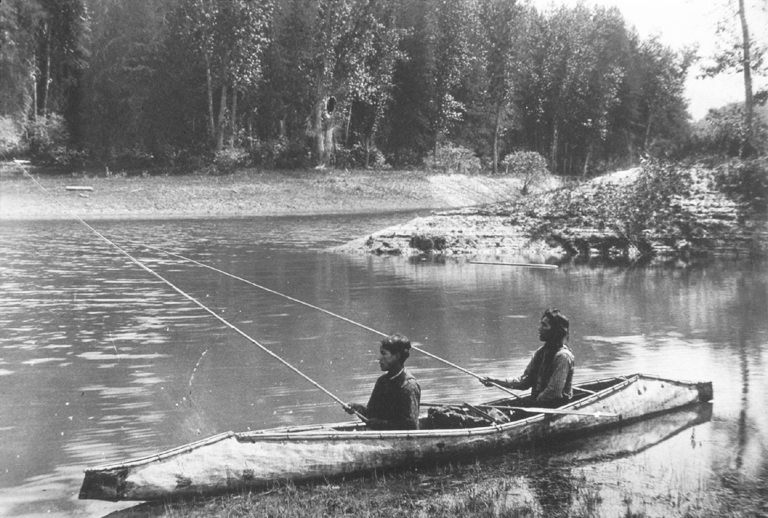 A photo of Kalispel Tribal members in a canoe on Lake Pend Oreille. The photo is credited to E. Curtis, c. 1908.

Considering that the land would never be commercially developed by The Idaho Club, Haberman suggested donating the land outright to KLT, reasoning that KLT would be in a better position to manage the land for conservation.

KLT staff had another idea. Through many conversations with Ray Entz, the Kalispel Tribe’s director of Wildlife and Terrestrial Resources, KLT recognized that the tribe had been working to revive its canoe culture but was limited by a lack of suitable access points. Realizing that the parcel is part of the Kalispel Tribe’s homeland and includes undeveloped access to Pack River, KLT proposed that Haberman give the parcel to the tribe instead.

On Dec. 27, the Kalispel reclaimed a portion of their traditional homeland fronting the Pack River Delta by means of the gift from The Idaho Club.

KLT’s conservation work involves protecting culturally significant lands within the Kaniksu Region, which encompasses the historical range of the Kalispel, extending from Plains, Mont., westward along the Clark Fork River to Lake Pend Oreille, and continuing along the Pend Oreille River to the Washington border.

This region was given the name “Kaniksu” by the Kalispel, who lived on and cared for it. The region encompasses parts of present-day Bonner and Boundary counties in Idaho, and Sanders County in Montana.

“KLT is honored to have served as a facilitator in support of this very meaningful gift. We recognize the value in returning this wild mountainside to its original caretakers,” said KLT Conservation Director Regan Plumb.

For KLT and the Kalispel Tribe, the gift is less about a conservation movement and more about the value of meaningful connections.

“There is strength in partnership. We probably wouldn’t have even been aware of the potential of this project if not for our relationship with KLT,” said Entz.

The Kalispel Tribe’s interest in the property goes beyond cultural and conservation value — the gift will help support development of canoe access and an interpretive site on the Pack River. The general public will benefit from use of the site as well, which will provide a safer access than the current pull-off at the Highway 200 bridge over the Pack River.

“When we look at a potential land acquisition, we look at it for its different values, like habitat and access. We don’t currently have this kind of access,” Entz said. “Most access points are shared with a public boat launch, which isn’t ideal for putting in a canoe.”

For The Idaho Club and Haberman, the gift yields satisfying returns, knowing that the land will be valued and cared for in perpetuity.

“We are pleased to have been presented the opportunity to donate a significant portion of The Idaho Club land holdings to the Kalispel Tribe with the professional guidance and encouragement of Kaniksu Land Trust,” Haberman said. “What started as a collaboration with Kaniksu Land Trust, resulted in what we believe will be a ‘best-case’ scenario for the property and critical habitat in and around the Pack River Delta.

“We believe that this parcel is particularly significant from a conservation perspective due to its direct frontage on the Pack River Delta, natural vistas from the Pack River and Lake Pend Oreille, and prominent location within the natural habitat of the delta,” Haberman added. “Given our desire to make an impactful donation that permanently benefits the area, we believe we could not have found a more qualified and motivated permanent steward for this critical habitat than the Kalispel Tribe.”