The colorful history of the Tour de France

Perhaps you developed an appreciation of the Tour de France, as I did, while watching Greg LeMond and Lance Armstrong dominate what was historically a European sport. Or maybe, while flipping through the channels you saw last year’s winner, Chris Froome, toss his broken bike off the road and start running up a mountain. Today, it is the biggest sporting event in the world with 15 million spectators flocking to the scene and 3.5 billion people watching on television, according to the organizers. But the Tour has been around since 1903 and has more than its share of interesting storylines, memorable characters and, yes, controversy. The only thing that  has been constant from the beginning is the tenacity it takes to win — or just to finish. 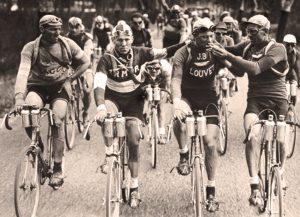 It began as a successful publicity campaign to save French newspaper L’Auto by Henri Desgrange, the director-editor and a former champion cyclist himself. For many early cyclists, this was an attractive alternative to coal mining. The roads were all gravel, the tires were hard, and the rims were wooden.  They wore goggles because rocks would fly off the tires—one cyclist even lost an eye to the Tour. The first Tour had only six stages but they were longer by far than anything seen today, averaging 250 miles each. Contestants rode through the night, crossing the finish line like zombies. The first Tour only featured 60 riders, but after the fourth stage, only 24 remained. There were more than 64 hours separating the winner, Maurice “The Little Chimney Sweep” Garin, from the last place finisher.

Cheating has always been endemic. In fact, the following year Garin was disqualified for supposedly hopping a train. He wasn’t the only one—night riding made cars and trains an easy temptation. (It was subsequently omitted.) In one instance, fans of a hometown favorite formed a blockade and started beating the leaders until an official showed up and fired pistol shots. Later they used tacks and glass to slow down the leaders. Many performance-enhancing substances were tried, some with more success than others. Alcohol and ether were used to dull the pain. One favored contender had to drop out from stomach cramps he developed drinking wine. In 1924, Henri Pélissier and his brother, Charles, told a journalist they used strychnine, cocaine, chloroform, aspirin, “horse ointment” and other drugs.

To put the cheating in perspective, you’d have to see the sadistic side of event founder Desgrange, who decreed “the ultimate race would be one where only one man crosses the finish line.” It seems that the Tour was at times something to be merely survived. Like gladiators, they endured more than your average athlete. Circumstances were stacked against them. They had to carry everything, providing for their own food as well. They had to make all their own repairs and could not replace a broken bike. They wore spare tires and tubes around their bodies. One rider was disqualified for tossing a torn tube by the side of the road instead of carting it around with him. Advances in technology, like metal rims and multiple gears, were withheld from racers. Drafting was not allowed. If a stage was deemed too easy, it was lengthened. One winner was reported to say as he rode by the organizers’ table “all of you are murderers.”

Slowly things started to change in favor of the racers. In 1925, drafting was allowed. Later, with the advent of teams and support vehicles, riders could take advantage of new strategies and enjoy aid if they needed it. The teams went back and forth between sponsored teams and national teams, but for a while walk-ons, called touriste-routiers, were welcome. These were some of the more colorful characters —one, after winning his stage was seen on the streets performing acrobatics for money in order to afford a room for the night.

There have been a number of animal encounters. A flock of sheep halted the entire peloton, a German rider flipped his bike on a golden retriever, llamas were constantly being drawn to the residual heat of the road and one year, bear attacks in the mountains were a real threat.

The Tour created an elite group of “supermen” (unfortunately, no “superwomen” yet) like Eddy Merckx, called “the Cannibal” for his insatiable appetite for victory and hated for not being French.  He holds the record for most stages won, at 34, and still remains the only one to win all three classifications in one race. Merckx, Jacques Anquetil, Bernard Hinault, and Miguel Indurain remain the only ones to win five Tours. Gino Bartali won two Tours 10 years apart. This year will be the first tour without legend Bernard Hinault either racing or directing since the late ‘70s. Epitomizing the spirit of the race, he once stated, “As long as I breathe, I attack.” But it will feature former points champions Peter Sagan and Mark Cavendish as well as former overall champions Chris Froome and Alberto Contador.

Tune in with the rest of the world July 1.