Friday night’s climate change presentation and panel discussion, “Let’s Clear the Air: A Conversation about Climate, Energy and Jobs,” attracted a full Sandpoint Community Hall. And as the night went on, it became increasingly clear that attendees came from either side of the political aisle. 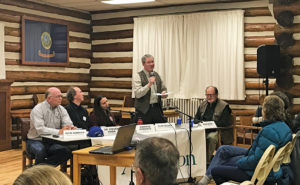 Commissioner Glen Bailey speaks to an audience of over 80 people at the “Let’s Clear the Air” presentation. Presenters (from left to right) include John Sandvig, Dr. Steven Ghan and Jennifer Syrowitz while Bailey and Bob Boeh, right, were invited to give feedback. Photo by Lyndsie Kiebert.

This is something organizers Gabrielle Duebendorfer and Amy Phillips had hoped for. Both women, volunteers with the Sandpoint chapter of Citizens’ Climate Lobby, said in their opening statements that “Let’s Clear the Air” was meant to do just that: create discussion that would hopefully clear up the murky territory of climate change debate.

“This is about solutions, but we are welcoming all perspectives,” Duebendorfer said.

The evening began with a presentation from Steven Ghan, a climate scientist; John Sandvig, a former aerospace executive; and Jennifer Syrowitz, an Audubon conservation manager. Each took turns talking about a different aspect of the climate change issue, emphasizing the “non-partisan” nature of the topic.

The presenters talked about how when people want to prepare for the worst, they buy insurance. They said that even if someone were skeptical of the climate science that points to human-caused warming, wouldn’t they want an insurance policy to protect them from the possible consequences?

One such solution was the focus of the presentation, which was the last of several presentations on the “Water, Wind and Fire Tour,” put on by CCL and Audubon Washington volunteers. That solution, or “insurance policy,” is called Carbon Fee and Dividend.

Carbon Fee and Dividend is what CCL refers to as “a bipartisan, market-based plan to manage climate risk and grow our economy.”

In short, Carbon Fee and Dividend has three parts. First, there will be a carbon fee placed on fossil fuels at their source, such as a mine or well. Second, the revenue from that fee will be distributed to American households equally in a monthly dividend. Third, business relocation will be discouraged by imposing a border adjustment on imports from countries without a carbon fee.

Sandvig said the Carbon Fee and Dividend concept would cause changes in consumers’ behavior because those who use carbon will pay more than they get back in their dividends, and this will therefore cause migration to alternative energy sources.

Boeh made a brief presentation on the concept of forest management as a solution to changing climate, but then emphasized the importance of allowing the audience to ask questions of the presenters.

“I think the dividend may be a solution, but I think we need more conversation,” Boeh said.

District 1 State Rep. Sage Dixon, originally advertised as a panel member, sent in a statement to read in his absence due to a scheduling conflict. In it he expressed his skepticism toward human-caused climate change, and said he didn’t think the Carbon Fee and Dividend program was a good path for Idaho to follow.

Audience questions ranged from clarification of the Carbon Fee and Dividend plan to questions about other climate science claims about the earth cooling. Several people stayed at the hall after to meet with the presenters and panel members one-on-one.

“It met my expectations for scientific content and discussion of an economic policy that could go a long way to cutting carbon emissions and stimulating innovation in many sectors of our economy,” said event attendee Emily Faulkner. “I thought that our county commissioner in particular spoke to a lot of the misgivings that people have because they don’t really understand what Carbon Fee and Dividend could mean for our country and for our planet.”