Says ‘guilt-by-association’ is ‘not appropriate’

Idaho Lt. Gov. Janice McGeachin is running into some trouble and having a harder time than usual shaking it off, as her recent participation in the America First Political Action Conference event in Florida has drawn calls for her resignation and, on March 1, a statement from the Idaho Republican Party. 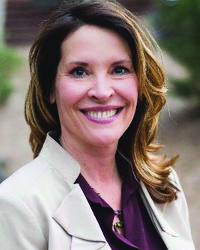 AFPAC is an avowed far-right group that advocates for U.S. isolationism, stricter border controls and a suite of other positions that are widely identified as white-nationalist. Organizer Nick Fuentes is personally known for his anti-semitic statements, including Holocaust denial. He also attended the violent “Unite the Right” rally in Charlottesville in 2017 and participated in the Jan. 6 Capitol insurrection in 2021, for which he was subpoenaed by Congress in January.

Fuentes spoke at the Feb. 25 gathering of AFPAC, as did controversial Georgia Republican Rep. Marjorie Taylor Greene and McGeachin, the latter via a prerecorded video.

According to a Feb. 26 report from the Associated Press, McGeachin — who is in a hotly contested GOP primary race for Idaho governor — “appears to be one of the highest-ranking elected state officials to have ever participated in one of the group’s gatherings.”

Backlash to McGeachin taking part in the 2022 AFPAC event has been swift, prompting her to push back against criticism with the claim she is being unfairly targeted by “the media” in a “guilt-by-association game.”

“[C]onservatives (and only conservatives) are accused of believing everything ever said by anyone with whom they share a stage. Don’t tell me what I believe. Listen to my words,” McGeaching wrote on Twitter.

She went on to state that she “support[s] America First policies including individual liberty, election integrity, a strong and secure border, school choice, energy independence, reducing taxes and regulations and supporting American businesses.”

McGeachin added that she had been asked to contribute a video to the event, “and I took the opportunity to share my views about these vital America First policies.”

The lieutenant governor concluded by denying that she supports “identity poltiics or other discriminatory views that only seek to divide us and not unite us.”

The AP reported that McGeachin in her speech to AFPAC called for “freedom fighters all over this country that are willing to stand up and fight,” including “amongst our own ranks.”

Moderate Idaho Republicans as part of the Take Back Idaho organization pressed McGeachin to resign. In a tense Statehouse interview with Boise-based KTVB-TV, she said she had not been familiar with the political extremism espoused by AFPAC and its founder Fuentes prior to taking part in the event, telling a reporter, “Well, you know what, Nick Fuentes, as I said, I don’t know him. I, he’s never, I’ve never met him. I don’t know, you know, what is everything that he says or doesn’t say, is not, does not reflect on who I am or who the thousands of others that are participating in this movement.”

In a particularly testy moment in the interview, McGeachin said, “That every time, any time there’s any kind of affiliation with anybody at any time on any stage that we’re guilty by association. And it’s not — it’s not appropriate.”

Greene also minimized the significance of her appearance at the AFPAC event, telling CBS News on March 1 that she had been unfamiliar with the beliefs and activities of the organizers prior to taking part.

“It wasn’t an alignment. It was to talk about getting everyone together to save our country,” Greene told CBS News, echoing McGeachin’s remarks to KTVB that she spoke to the “young conservatives” of AFPAC because they are in a fight for the “soul” of the country.

Responding to the participation of fellow Republicans at the AFPAC event, Utah Sen. Mitt Romney told CNN on Feb. 27, “I’ve got morons on my team.”

The Idaho GOP weighed in March 1, with state Party Chairman Tom Luna commenting: “White supremacy, antisemitism, bigotry and neo-Nazism are reprehensible and have no place in the Idaho Republican Party. We always have and will continue to stand against these divisive ideologies. We are the Party of Lincoln, which stands for individual liberty, inclusion and diversity of thought. The promotion of hatred, bigotry, or the anti-American values of Russia is fundamentally incompatible with our shared conservative ideals and values.”

Regarding McGeachin’s participation in the AFPAC gathering, the Idaho GOP referred to the lieutenant governor’s Twitter statement.