Little announced the spending plans during a Sept. 11 press conference, sharing that the U.S. Treasury had opened CARES Act spending guidelines to allow states to move the federal aid money into education budgets. 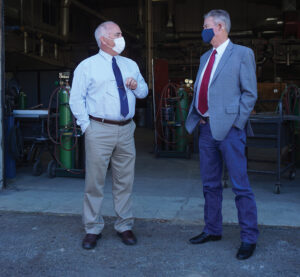 “We did not hesitate to seize the opportunity to support our schools,” he said.

The $99 million going to K-12 schools will serve as backfill for the cuts to the education budget that Little announced earlier this spring. However, under CARES Act rules, the new money will need to be used to supplement pandemic-caused shortcomings.

“The great news is that [districts] can use this money to address their unique needs,” said Idaho Superintendent of Public Instruction Sherri Ybarra at the press conference.

The $50 million dedicated to the Strong Families, Strong Students program will be distributed based on guidelines yet to be set by the Idaho State Board of Education. Idaho families could receive $1,500 per eligible student with a maximum award of $3,500 per family, according to the governor’s office, and can use the funds to purchase eligible educational materials. Applications for Strong Families, Strong Students grants are likely to open in October.

“Families continue to face many challenges as they rapidly adapt to changing circumstances in their children’s education,” Little said.

The governor fielded questions about how the $50 million sum could not possibly cover every family in Idaho, and explained that the grants are meant mostly for students forced to attend school entirely online due to high COVID-19 case counts in their communities.

“We want to make it available to the parents who are most in need and who are making the most sacrifices,” Little said.

The proposals moved forward despite objections from Lt. Gov. Janice McGeachin, who sent a memo to committee members prior to the Sept. 15 meeting urging them to postpone the vote. She also shared she would not be able to make the meeting.

“Spending $150 million is no small matter and we have not had an opportunity to review fully the details of the proposal nor have I seen any proof that it is even consistent with federal guidelines for the use of CARES Act money,” McGeachin wrote in the memo, obtained by Idaho Education News.

McGeachin did not explain why she’d miss the CFAC meeting, but did share on her personal Twitter account that she was headed to an election fundraiser for President Donald Trump in Stanley slated for Tuesday evening, where Donald Trump, Jr. would be in attendance. An online invitation for the event shows tickets to the event were $2,800 per dinner guest.