The Clark Fork Alumni Tournament is a fundraiser, a reunion and a darn good time

Many people say Christmas is their favorite holiday. For some, it’s Independence Day. For the weirdos, it’s Halloween. 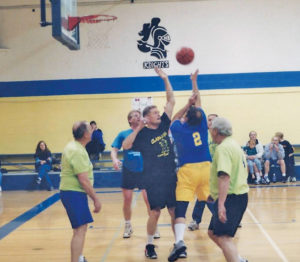 On the surface, the alumni tourney is a weekend of volleyball and basketball, with a silent auction, some raffles and a couple rowdy nights at the town’s only bar mixed in.

But for a kid who grew up believing that the coolest thing in the world was to be a Wampus Cat, the weekend takes on more meaning, and I think that applies for a lot of alumni weekend diehards out there.

Though the weekend has evolved over its 30 years of existence, the original intent is the same: raise money for CFHS athletic programs and serve as a reunion for decades of alumni. The tournament has expanded to include participants who didn’t attend CFHS, and while the original weekends only featured basketball, women can now form volleyball teams.

There are typically around eight basketball teams and six volleyball teams, and games are played over the course of three days. Players must pay $35 each to participate and receive their official T-shirt jerseys. Spectators pay at the gate to watch games, or can pay for a full weekend pass.

This year, the tournament will honor Paul Tallman, a CFHS alumnus and longtime tournament participant who passed away last month. Tallman is in all of my favorite alumni tourney memories, and he represents the best of us Wampus Cats. He will be missed this year.

The school relies heavily on the tournament in order to keep our athletic programs funded, and above all, it’s a great time for participants and spectators alike. While it’s too late to sign up to play on a team, there will be plenty of games to watch, raffles to win and auction items to bid on, including a brand new chainsaw.