The city of Sandpoint is working to inform the public on its parking deal with Kaniksu Health Services.

Approved two weeks ago by council members, the agreement to lease 60 parking spaces to Kaniksu Health Services for its planned 2018 relocation to downtown Sandpoint caught some residents off guard. However, Sandpoint Mayor Shelby Rognstad said there’s still a year and a half before it goes into effect—time the city can use to tweak its parking policy.

“The reason it’s been so rapid is because Kaniksu needs to make a decision [about their expansion plans] by the summer of 2018,” Rognstad said. “From my perspective it’s either do or die.”

The arrangement stems from Kaniksu Health Services’ need for a larger facility, which presented an opportunity to relocate downtown at Second Avenue and Main Street, currently the office for Tomlinson Sotheby’s International Realty. The move would benefit the city by moving more professionals downtown, while Kaniksu Health doctors and patients appreciate the close proximity to Bonner General Health, Rognstad said.

“This would bring 85 well-paid employees to the downtown core,” he added. “The Chances of them shopping or going out to lunch [at downtown businesses] are very good.” 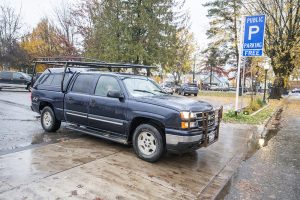 Kaniksu officials initially sought a parking agreement with the city to assure financiers they would have adequate parking, Rognstad said. In addition to the 60 spaces leased from the city—around half the city parking lot—business officials plan to build 40 covered spaces available to the public outside business owners if they follow through on the move.

In addition to leasing the spaces and providing 40 new spots, Kaniksu Health would also contribute up to $10,000 to fund a parking study for downtown Sandpoint. According to Rognstad, the study will evaluate Sandpoint’s existing parking, determine whether or not it’s meeting demand and plot out a strategic plan for future parking policy.

While both the 40 covered spaces built by Kaniksu and the 60 city lot spaces will be available for parking outside business hours, some residents worried that the change would negatively affect parking for other downtown employees. Recently, the city changed the lot’s policy to allow for 24-hour parking, which improved parking options for downtown workers and freed up on-street parking for business customers.

According to Rognstad, city officials hope to circumvent this problem by changing parking policy in other downtown areas. For instance, a specific street could be designated as 24-hour parking, he said. Downtown employees can also utilize the free parking lots in the Granary District or at Sand Creek. Finally, once the city takes control of downtown streets following the reversion to two-way traffic planned this month, Sandpoint officials plan to restripe the parking to diagonal spaces, adding between 30 and 40 additional spots downtown.

Rognstad said he’s heard another concern based around a perception that Kaniksu primarily treats uninsured individuals—types that some don’t want downtown. In fact, that only accounts for about 11 percent of Kaniksu patients. Furthermore, Rognstad said that criticism sets an elitist tone unbecoming of Sandpoint.

Council members will reconsider the parking agreement at the Nov. 16 council meeting. In particular, they will reexamine an amendment originally passed that limited the agreement terms from a 10-year contract with two five-year options to 10 years with one five-year option. According to Rognstad, that was a deal-breaker for Kaniksu.

Meanwhile, Rognstad said the city will have to define its ultimate goals with parking policy before officials return to council chambers.

“Is our goal as a city to create as much public parking possible, or is it to encourage economic development?” he said.