The last public forum of the election cycle saw local candidates sharing viewpoints on everything from health care to public lands.

Hosted by the Sandpoint Reader and Sandpoint Online, the Wednesday forum was driven entirely by voter questions. Audience members submitted questions to a panel of moderators, while those watching Sandpoint Online’s internet stream messaged them in. 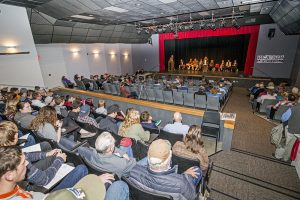 District 1 Sen. Shawn Keough, R-Sandpoint, asked voters to look at her long record as an Idaho legislator and evaluate her based on her work. Under fire from the anti-federalist factions of the Republican Party, Keough said she was still committed to “common-sense leadership.” She emphasized support for infrastructure and education development.

On the other hand, her opponent, Steve Tanner, said that while he was running as a Democrat, he saw the government’s primary function as enacting justice, a role perverted by legalized same-sex marriage, abortion and the teaching of evolution in schools.

Rep. Sage Dixon, R-Ponderay, emphasized that while he is a man of strong conservative principles, he wanted to hear the concerns of all his constituents. On policy, he envisions an Idaho less reliant on the federal government—a goal achieved through state ownership of federally held lands, resistance to Obamacare and improved access to occupational training for recently graduated high school students.

Stephen Howlett, Dixon’s Democratic opponent for District 1 representative Seat B, said he was more open to compromise to relieve government deadlock than Dixon. He supported closing the Medicaid gap, strengthening programs for veterans and senior citizens and investigating a minimum wage increase.

Kate McAlister, a Democrat challenging Rep. Heather Scott for District 1 representative Seat A, prioritized economic development, education and environmental conservation. The best policies toward those goals, she said, was to continue collaboration with the federal government on public land management, maintain education funding levels and close the Medicaid gap.

Scott, McAlister’s opponent, did not attend the forum. In a social media post earlier that day, she claimed the event was maliciously designed to “launch negative attacks on conservative candidates and the core values the majority of north Idaho voters adhere to.”

District 7 candidates Jessica Chilcott, running for representative seat A, and Ken Meyers, running for the state senate, attended the forum while their opponents did not. They used the opportunity to talk about the need for a minimum wage increase, improved support for Idaho schools and the need to close the Medicaid gap.

Likewise, Terry Ford, a write-in candidate for Bonner County Sheriff, made his case without counterpoints from Sheriff Daryl Wheeler, who did not respond to forum invitations. Ford said his goals were to run the sheriff’s office with integrity, address the flow of drugs into Bonner County, protect the Second Amendment and ensure all property crimes are investigated.

Finally, Republican candidates for the Bonner County Board of Commissioners Jeff Connolly and Dan McDonald are running unopposed, but they still assured voters they intend to  manage the county with openness and transparency. They encouraged residents to contact them with their questions and concerns.