For the past several months, the city has struggled to clarify its policy on residential development near Sandpoint Airport.

An upcoming public meeting is intended to shed some light on what has proven to be a murky issue. Scheduled for July 17, the meeting will gather public input the city’s proposal to set a temporary moratorium on rezoning near the airport. While some see development near the airport as a public safety issue, others believe it’s one of Sandpoint’s few remaining locations for residential development. 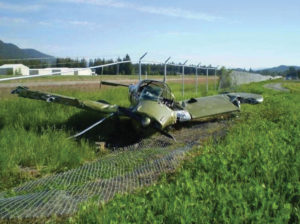 A small plane crash in 2008 at Sandpoint Airport, with Boyer Ave. passing to the right. Courtesy City of Sandpoint.

The Sandpoint City Council tackled the issue in its council meeting two weeks ago, when they approved a pending rezoning request for a portion of a property near the airport. The portion rezoned sits outside the Lateral Safety Zone, a restricted area because of its proximity to the runway. As the council deliberated the request over the past months, members were concerned they were flying blind without any guiding policy in the Sandpoint Comprehensive Plan.

According to Sandpoint City Administrator Jennifer Stapleton, the proposed moratorium on airport-area rezoning will give the City Council time to develop airport-related changes to the Comprehensive Plan.

“Through the Comprehensive Plan update involving community and stakeholder input, the City will also consider adopting best practices to ensure people living or working nearby are not exposed to unacceptable levels of noise or air traffic-related hazards, and to preserve economic viability,” Stapleton wrote in a press release.

Noise and safety are two of the biggest concerns about residential development near the airport. According to a report prepared by Sandpoint Planning and Community Development Director Aaron Qualls, noise near airports is often louder than is considered comfortable for a residential neighborhood. There’s also the risk of airplane crashes. Over the past several years, there have been a handful of accidents at Sandpoint Airport, many of them involving deer running across the runway.

On the other hand, the proposed moratorium leaves some property owners in limbo. Local resident Maureen Tillberg said she and her husband have gone through every legal step to obtain their rezoning, a process costing them significant time and money. In late spring, Mayor Shelby Rogstad vetoed their request, citing airport safety concerns. In a letter to the city, Tillberg attorney Douglas Marfice said the veto violated state and local law governing city procedure.

The city has a responsibility to deliver on requests within a set time period, she added, and a moratorium only worsens their situation.

“This is once again an attempt to block our legally-obtained zone change,” she said. “It appears they are doing everything in their power to block our zone change. We are going to suggest there be a one year moratorium on any expansion of the airport.”