When Sandpoint City Council members shape next year’s budget this July and August, the structure of local fire services could be reshaped along with it. 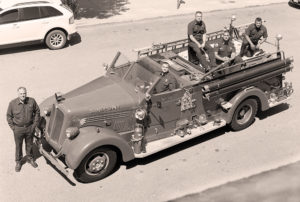 Chief Ron Stocking, left, stands with Selkirk Fire, Rescue and EMS crew members in a vintage fire engine in 2015, re-enacting a Ross Hall portrait taken in the late 1940s. To the right of Stocking is Capt. Jake Hilton (at the wheel), Eng. Troy Badeaux, Eng Jeff Littlefield and Lt. Mick Adams. Photograph by Ben Olson, with special thanks to Ross Hall and Dann Hall at the Hallans Gallery.

The central question before council members is whether to maintain the existing joint powers agreement between Sandpoint, Sagle and Westside fire services or regionalize the JPA as its own legal entity.

According to Sandpoint City Administrator Jennifer Stapleton, council members technically have three options available to them. They could return Sandpoint Fire to its original structure of localized service, maintain the existing JPA or regionalize it. However, Stapleton said only the last two options are under serious consideration, and each has its advantages and disadvantages. Whichever decision the council makes, it will be guided by a rigorous process of data collection and cost-benefit analysis, Stapleton said.

“It’s got to make good business sense, and the facts have to point there,” she added.

Sandpoint, Sagle and Westside fire services currently operate under a JPA called Selkirk Fire, Rescue and EMS that cuts down on the duplication of resources, saving money for all entities. The cohesion of the JPA also benefits mutual aid agreements. However, Selkirk Fire doesn’t exist in any legal sense. Instead, the three fire districts in the JPA manage independent finances and are guided by their own governing bodies.

“We’re operating jointly, but still under this structure, we have our own fire department,” Stapleton said. “We’ve agreed to work collaboratively and function together.”

Should members of Selkirk Fire choose to regionalize the services, the JPA would become its own legal entity with a single budget. Members of the JPA would contract its services rather than managing their own departments directly. An independent board of directors would ultimately make the critical guiding decisions, with seats on the board divided between the JPA members. The members would retain ownership of any contributed assets like firefighting apparatus.

“The city would have a couple seats on a joint board, but it would actually be an independent governing body,” Stapleton said.

The upside to making the JPA its own independent entity is easing the process for new members to join. It potentially paves the way for fire service to expand on a countywide scale. However, Stapleton also said that the membership model doesn’t offer one-to-one savings for the city. Under the existing JPA structure, for instance, the city is able to provide its fire department with its existing legal and human resources services.

“The question is, in the short to medium term is this in the best interest of Sandpoint taxpayers?” Stapleton said.