City Beach draws the most attention, including update on ‘property swap’

The city of Sandpoint is nearing the finish line in putting into place its Parks and Recreation Master Plan, devoting a substantial period of its City Council meeting June 3 to a trio of site specific recommendations for City Beach, the downtown Sand Creek waterfront and Travers-Centennial-Great Northern parks concept.

All three recommended plans will go back before the council at its Wednesday, June 17 meeting as appendices to the revised version of the full proposed master plan. Final approval of the plan isn’t expected until the council’s Wednesday, July 1 meeting.

In the meantime, Sandpoint Parks and Recreation Director Kim Woodruff and City Administrator Jennifer Stapleton provided an overview of the site specific recommendations, which have been updated to incorporate public feedback, with City Beach taking up the bulk of the presentation and much of it hinging on the proposed land swap between Sand-Ida and the city that has been in the works for nearly a year.

Framing the overall concept for the beach, Woodruff described it as representing “a vision of use and service to our citizens and visitors for the next 50-plus years.” 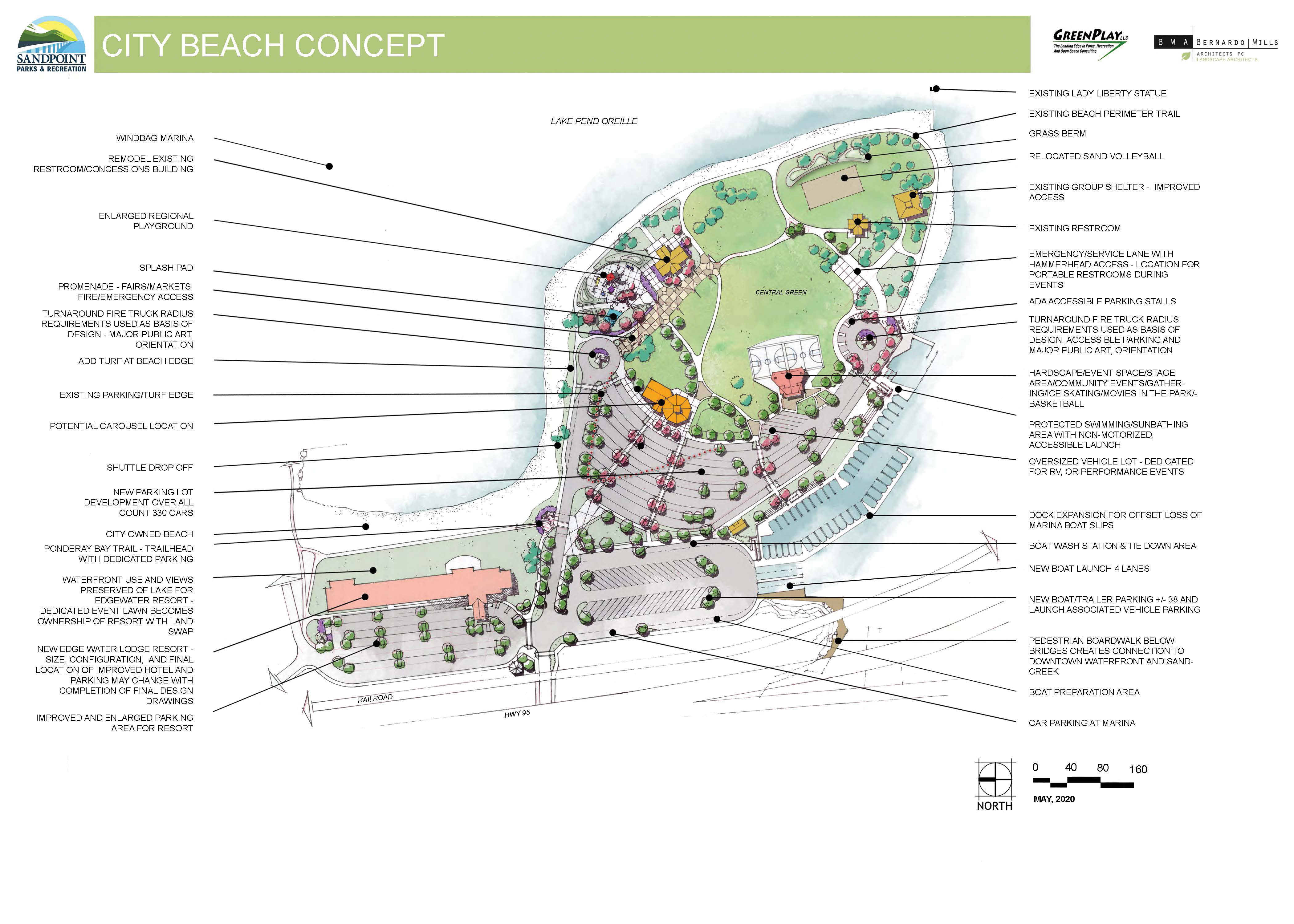 Accomplishing that, he said, first requires resolving conflicting uses by the boating public and beach-event activity public, which often find themselves jockeying for scarce parking spots and sometimes confronting an unsafe situation with pedestrians and bikers sharing cramped quarters with boats and trailers as they go up and down ramps at the south end of the beach.

According to the recommended plan, boat access would be moved farther west to the current RV park, which would be replaced with dedicated boat trailer parking — moving that use from the main parking area, which would meanwhile be expanded to accommodate 330 cars, plus RVs and other oversized vehicles.

However, Woodruff said, “critical to this plan is this property swap,” which would give Sand-Ida ownership of the city property in front of the Best Western Edgewater Resort in exchange for transferring the company-owned RV park property to the city.

“Accomplishing the acquisition of the property would accomplish this vision as proposed, which includes really additional waterfront for the public in perpetuity,” Stapleton told the council, underscoring the importance of increasing the amount of boat slips and improving access to the overall Parks Department.

“Our boat moorage is the most significant revenue generator in our parks system and supports many of the improvements to the parks system on a year over year basis,” she said.

So far, though, accomplishing a straight-across trade between the city and Sand-Ida has required navigating a number of factors, including the tear-down of the existing Best Western Edgewater and construction of a new, larger hotel on an expanded footprint. Stapleton said that project will likely require a conditional use permit, which would go through planning and zoning, then come before the City Council, though, “we haven’t seen the application for that yet.”

What’s more, the city-owned property on offer in the trade — which includes the wide strip of grass from the existing hotel to the sidewalk that runs along the beach proper — was gifted to Sandpoint by the railroad. Because of that, it carries with it restrictions, one of which is that it cannot be used for commercial purposes. Stapleton said the city has been in conversation with the railroad about release of those restrictions, “which would be what makes it desirable for the Cox family [which owns Sand-Ida].”

“The railroad has indicated .. in our discussion to date a willingness to release that restriction,” Stapleton added, noting that it may be possible to transfer the non-commercial restriction to the site of the proposed boat launch.

A public hearing on the property swap is expected in the coming weeks, though no date had been set as of presstime. Included in the public notice for that hearing will be appraisal information, which Stapleton said put the value of the RV park property in excess of $2 million.

She framed the swap as a way for the public to increase its waterfront ownership without having to front the expense of buying it. Meanwhile, the issue of the railroad property restrictions is anticipated to be cleared up by the time council members are asked to adopt a final master plan on July 1.

Describing it as “a more permanent solution” to a lease agreement that has operated for more than 40 years, Woodruff called the potential land trade “a game-changer.”

The importance of straightening out the boat access issue, as it relates to parking availability and balancing user groups at the beach, was made clear by the other recommendations.

To offset the expanded parking and increase the amount of open space, Woodruff said the center of the park would be reconfigured to promote “openness” — with trees being removed to make way for events like Beer Fest, music concerts and other large events.

In previous concepts for City Beach, an outdoor music venue was envisioned for the north end of the park; in the revised recommendation, that venue — consisting of a large bandshell-type structure fronted with an area of hardscape — has been moved to the south end of the park to free up space and views closer to the lake, improve sound dynamics and give access to the expanded parking.

The hardscape in front of the bandshell would feature removable poles so that the basketball hoops could be removed to make way for other events. The recommended site for the sand volleyball courts would be adjacent to the existing pavilion, which would stay the same, along with the Lady Liberty pier.

Beyond that, other changes include remodeling the restrooms, concessions stand and lifeguard station; accommodating the Carousel of Smiles near the proposed bandshell; incorporating a trailhead for the Pend Oreille Bay Trail; and considering a splash pad and improvements to create a “regional playground.”

View all of the site specific plans and provide feedback at sandpointidaho.gov/your-government/engagesandpoint. The plans are also on display at City Hall. Watch the entire June 3 City Council presentation at the city’s YouTube channel, where it will be posting footage from meetings going forward: youtube.com/cityofsandpoint.