The Sandpoint City Council took up a number of old business items Sept. 18, chief among them pushback to a recent decision by the U.S. Coast Guard regarding the second rail bridge proposed by BNSF, and two amendments to the city’s solid waste contract that could affect both commercial and residential customers. 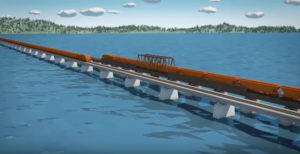 A digital rendering of what the proposed second rail bridge project would look like. Courtesy of YouTube.

Before all that, however, Mark Sauter, of the Bonner County Fire Chiefs Association, provided an update on discussions surrounding county emergency medical services. Sauter told the City Council that area chiefs have been talking about a pilot program that could result in dedicating one ambulance to Sandoint and another to Ponderay, provided Bonner County EMS vacates its facility at Bonner General Health.

“The chiefs believe it would be a good step forward to move some of those assets,” Sauter said, adding that such a move would save money by eliminating the BGH lease in favor of housing ambulances in area fire stations.

Offering a presentation on this and other county EMS-related topics, the Fire Chiefs Association will host a public meeting 6 p.m.-9 p.m. on Thursday, Oct. 24 in the main downstairs auditorium at the county administration building.

Representing the Idaho Conservation League, Mark Nykiel then spoke to the Council, asking that members consider submitting a letter asking the U.S. Coast Guard to reconsider requiring BNSF to undertake an EIS before proceeding with a second rail bridge. Time is of the essence, Nykiel said, as such a letter must be submitted within 30 days of the decision. While news of the Coast Guard’s decision went public Sept. 5, Nykiel said it was actually struck on Aug. 29.

What’s more, he reminded the Council that it approved an ordinance and associated letter in May 2018 that “strongly requests” BNSF produce an EIS “analyzing the full scope of direct, indirect and cumulative impacts” of the proposed 2.2-mile bridge.

City Council President Shannon Williamson, who also serves as Lake Pend Oreille Waterkeeper, asked Nykiel “how thoroughly or not thoroughly” the Coast Guard addressed issues raised by the city in its request for an EIS, to which he responded that more evidence is needed to prove that the project would reduce wait times and assess how raising rail speeds through town from 25 miles per hour to 35 mph would affect the likelihood and magnitude of a derailment. He also soil analysis of the BNSF right-of-way could reveal lake bed contaminants.

“I think an EIS would be a helpful thing this case,” Nykiel said, adding that the process would also open the project to more public input.

Council members agreed to look further at the proposal, asking staff to draft a letter asking the Coast Guard to reconsider its EIS decision, which will be considered at the Council’s special meeting Thursday, Sept. 26.

Finally, City Administrator Jennifer Stapleton briefed the Council on two amendments to the Waste Management contract — the first, decreasing the franchise fee it charges the Spokane-based garbage collection firm to offset the wear-and-tear on city streets resulting from heavy-duty vehicle traffic. Those franchise fees are passed onto commercial customers, who would see a commensurate 4% decrease in the City Solid Waste Fee, from 29% to 25%.

In part, she credited the “smart” garbage cans installed this summer throughout the downtown core and in city parks with helping bring down the franchise fee. The higher-capacity trash bins, combined with an overall reduction in the number of bins, means Waste Management crews are making fewer trips.

“They’re able to roll and pick up at the cans when needed,” Stapleton said.

The other contract amendment focused on a new program geared toward cleaning up the city’s recycling stream. As it is, too many contaminated or inappropriate items are making their way into Sandpoint’s recycling bins.

One proposal to fix the problem is a $25 fee for users who dispose of dirty or un-recyclable material in the blue bins. Under the previous contract, approved in April, that fee would have gone into effect Oct. 1, but upon further discussion planners thought it prudent to push back implementation to March 1, 2020 in order to provide for more public outreach and education.

After a lengthy discussion, Council members voted to approve the contract amendments, though added language stipulating that Waste Management return and present its outreach findings prior to final implementation of the recycling fee.