Encompassing 150 square feet, the demonstration first featured the Solar Roadways SR3.1 panel as a proof-of-concept in a pedestrian and bicycle setting. Three years later, Solar Roadways is updating the demo with its SR4 model, which is designed to produce 50 watts, compared to the previous 36 watts. 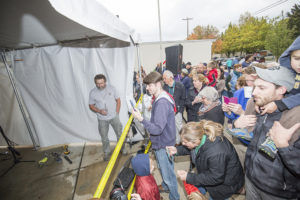 Crews removed the concrete that served as the base for the original system panels on Sept. 17. The new panels will rest on a recycled, rubber base. The revamp is expected to be completed in two weeks.

The initial $60,000 installation was funded primarily through a GEM Grant from the Idaho Department of Commerce and a grant by the Sandpoint Urban Renewal Agency. The update is being paid for by Solar Roadways.