The Sandpoint City Council at its regular meeting Nov. 2 unanimously approved a trio of requests from Derek Mulgrew, who is developing Phase 4 of the University Place housing project as a planned unit development containing 227 dwellings comprising duplexes, townhomes and apartment buildings.

Mulgrew went before the Sandpoint Planning and Zoning Commission in late September with his request for a rezone of the 14.5-acre property from single-family to multi-family residential, a combined PUD preliminary and final development plan, and amended preliminary plat.

The commission voted Sept. 20 to recommend approval of the requests with 16 conditions — most of which the developer agreed were reasonable, including requirements for additional open space, which Mulgrew and his team addressed with a revised site map presented Nov. 2 to council.

Among the conditions was that exterior walls — or at least portions of them — on the southern-facing facades of the four apartment complexes proposed for the southern part of the development be soundproofed due to their proximity to the railroad tracks that cross North Boyer Avenue. “Product that feels like a single family home but is still attached.” 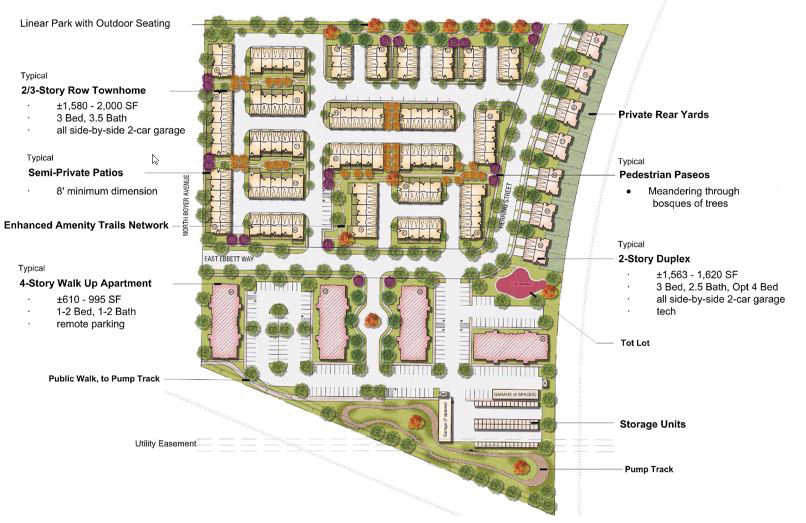 Also, the commission recommended that a “linear park” pathway along the northern stretch of the property be extended to connect with North Boyer, as well as expand a proposed 8,000-square-foot open space planned for the corner of East Ebbett Way and Herring Avenue in order to create “a focal point neighborhood park.”

Mulgrew’s revised site plan “somewhat incorporated” those elements in the final plan, said City Planner Amy Tweeten, including a newly identified “tot lot” — a.k.a., children’s playground — the elimination of a previously fronted neighborhood commercial structure in favor of a paved “pump track” for use by bicyclists and other wheeled-recreation users, and the extension of the northern linear path to North Boyer Avenue.

Tweeten in her presentation to the council said, “It appears some of the open space conditions have been addressed with the revised open space plan, but additional information is needed.”

Councilor Jason Welker agreed that the open space plan needed more work, and also that the conditions should be amended to put in place more detailed descriptions of “just what we’re getting” for the code waivers sought by the developer.

Specifically, Welker moved to strike two conditions and roll them into another related to open spaces, spelling out that the plan shall include a children’s playground with structures approved by city staff, the asphalt pump track to be approved by Parks and Rec. staff, a paved bikeway connection to North Boyer on the south end of the property and a dog waste plan to cover the entire site.

“I am hoping to include some more robust language about the investment in those open spaces,” Welker said, earlier stating that, “I’m personally really excited about this development.”

One of the variances that both P&Z commissioners and councilors approved was allowing building heights to exceed the residential multi-family limit of 40 feet — townhomes would be allowed to rise to 45 feet and multi-family buildings would be cleared to rise up to 48 feet.

The developer also sought a reduction in the minimum lot size for the townhomes, as the current minimum is 3,500 square feet, though he said “there’s no way to really build an efficient multi-family attached product” on that size of parcel.

“This isn’t a condo,” he said, adding that building higher on a smaller footprint makes the way for lower building costs, and by offering the units as fee simple, it “allows for a diverse range of financing options that would otherwise not be achieved if it was a condo.”

“This opens up, and I think hits, a different price point,” Mulgrew said.

As has become the norm when City Hall considers any housing development, the notion of “affordability” came up as a critical component of the deliberations.

Mulgrew said that apartments are targeted for what some might describe as “affordable housing,” though he admitted that he disfavors that term because “it’s way overused.”

Rather, he said the development as a whole is intended to be a master-planned, cohesive project unlike anything that has yet been built in Sandpoint, with options directed at first-time homebuyers, empty-nesters, down-sizers and individuals who may have relocated to the area for work but not yet ready to commit to buying a home.

Mulgrew characterized the duplexes and townhomes as a “product that feels like a single-family home but is still attached.”

“We really don’t have a new, fresh product [in Sandpoint] that’s got the architectural styling and movement that these units all have .. at a price point that will allow us to attract that first-time buyer on the townhome side and perhaps a rental occupant in the rest of the community,” he said.

Council members were overwhelmingly positive toward the Phase 4 project.

Councilor Justin Dick also lauded the project: “I truly like the variety of housing that’s going up, as well as the amount of inventory,” he said.

Council President Kate McAlister, who said that while she’s “conflicted by this because I really am an advocate for the low-wage earners,” said that she’s “very excited about this project.”

Still, echoing previous comments she’s made before council, McAlister added that, “We really need something for people making $45,000 and below. … I’m hoping these will be an answer, because we are losing our young people.”

With the unanimous approval of the requests, Mayor Shelby Rognstad congratulated the developers.

“It’s an excellent project,” he said.