Most of us have fun memories of cute little snails from kindergarten. We knew they were slow, patient and harmless creatures that carried their home on their back and were eager to make your day great.

Well, let’s just go ahead and throw that into this handy dumpster and set that on fire, because I’m about to ruin everyone’s childhood. 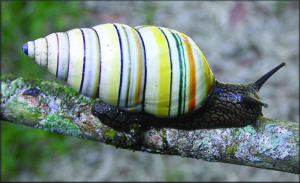 The snail in everyone’s mind’s eye is Helix pomatia, sometimes called the Roman snail or escargot by the adventurous eater. They’re cute, slow little molluscs with tiny eyestalks and tentacle feelers to sense their surroundings. They also have a slow, inefficient method of moving by contracting the foot muscle that is most of their lower body and relaxing it to pull themselves along, while leaving a slimy trail of mucus in their wake that helps reduce friction and lets them stick to things. Helix pomatia is hermaphroditic, which means each snail contains both set of reproductive organs. They’re primarily herbivores, but they’ve been known to commit to cannibalism under unfavorable conditions.

Note, that’s unfavorable, not extreme. We’re not talking Donner Party here, we’re talking: “Dave from accounting ate my yogurt for lunch, so I guess I’m going to have to kill and eat Jonathan.”

Maybe it’s a good thing molluscs didn’t achieve sentience on Earth, or I’d be writing this article with tentacles while slurping on a Bret sandwich right now.

If you think this is the worst of how I’m going to ruin all of our childhoods, avert your eyes now. This was the warm-up round.

The Giant African Land Snail is exactly what it sounds like: A giant terrestrial snail from Africa. This beast gets up to almost 8 inches long. If you think the Serengeti is the only place you’re going to encounter this Lovecraftian nightmare, I’ve got news for you: They’ve invaded southern Florida. Thanks to the illegal exotic pet trade and produce like bananas and coffee shipped from Africa, these beasts have found a home in the land of gators and snakes and have a propensity for eating rat poop and stucco siding, spreading all manner of parasitic diseases in their slimy wake.

If that’s not bad enough for you, Australia strikes again to bring insomnia-inducing nightmare fuel to your pillow at night. Home to not one, not two, but a bare minimum of FIVE carnivorous snails, Australia further establishes its dominance as the land down under natural hell. I mean, I love Australia, but I’m pretty sure I couldn’t sleep there soundly on a vacation. Some of these terrifying snails have specially modified radula, prehensile tongues, that eviscerate and suck bits of insects, worms or anything else made of delicious flesh they can trap with their sticky goop.

Perhaps the most ruthless of all snails is the moon snail. This thing slides around the ocean floor looking for clams. The clams, so smug with their thick shells, get mounted by the moon snail, which uses its radula to drill through the clam’s shell, then sprays acid inside and sucks the remains out. If this brutal tactic isn’t completely unsettling to you, perhaps it’s time to reconsider career paths to become an evil genius.

So far, much of this has been restricted to atrocities against smaller animals. So long as you’re not a clam or an earthworm, you don’t have a whole lot to worry about. That’s about to change. Multitudes of species of freshwater snails inhabit our waterways. Given their status as bottom feeders, they eat the literal crap that other animals don’t touch. Much of this refuse is loaded with all manner of parasites and diseases that find safe refuge for replication in the digestive tracts of these snails, which go on to poop out even more of it. When they switch between being terrestrial and aquatic, this further complicates the problem and brings disease where it normally wouldn’t reside.

Because of that, freshwater snails are the primary contributor to the second-most infectious parasitic disease in the world: schistosomiasis. (The number-one spot goes to malaria.) Schistosomiasis causes a host of ailments from joint aches to bladder cancer and painful urination, and it afflicts more than 200 million people around the world, mostly in poorer tropical countries without access to reasonable (or any) healthcare.

Before you put this issue down to start smashing every snail you see with a bat, I should let you know about some really awesome snails.

The spiny murex is a deep sea snail that creates a shell right out of an “Iron Maiden” music video, covered in curved spikes that protect it from fish. Ironically, its defense seems to be its ultimate undoing, as the spikes get caught in fishing nets that pull them to the surface en masse and drop them into gift shops up and down the coast.

Hinea brasiliana is an awesome tiny snail you’d think is in Brazil, but is really near Australia and New Zealand. It’s one of just a handful of snails around the world capable of bioluminescence, and will flash a bright green when it’s threatened. Its shell is slightly translucent and will diffuse the color to appear much bigger than it really is, like a warning light.

Liguus virgineus is a snail aptly dubbed the “candy cane snail.” It has a very colorful, conical shell reminiscent of the banding on candy canes. It makes its home in the Caribbean, and is struggling against human-caused extinction. It’s actually illegal to harvest these for their shells now because of that.

Now that I’ve confused and ruined your childhood, I’m going to go make sure Dave doesn’t steal that yogurt…