Bumpy road: A brief history of the proposed Sagle asphalt plant and what’s happening next

By Cate Huisman
Special to the Reader

The saga of the proposed asphalt batch plant in Sagle continues. It’s a window into how governments make land use decisions and how citizens can affect the outcome. Here’s a summary of what’s been happening. 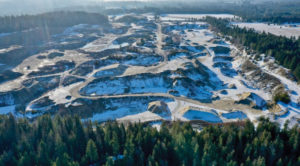 Before spring 2018, Bonner County zoning code allowed an asphalt batch plant to operate only in an Industrial zone. In the spring of 2018, the county made changes to allow asphalt plants in forest, agricultural, and rural zones, if a plant was granted a conditional use permit (CUP). A CUP allows the county to review the effects of the proposed use and provides for public input.

The proposed plant would be in a rural zone. So — with the code change — Interstate Concrete and Asphalt Company applied for a CUP to operate an asphalt batch plant with their Sagle gravel pit. As required, Bonner County held a public hearing to gather community input about the proposed use.

Neighbors attended the hearing to voice their opinions. They were concerned about the noise, smell and traffic the plant might generate. They were also worried about the effects it might have on water and air quality. Interstate countered that it would help them run their business more efficiently. Idaho Department of Lands had found that the air and water quality concerns were unfounded.

The county granted Interstate its CUP. Opponents asked the county commission to reconsider this decision. When it did so, the commissioners confirmed the CUP.

Opponents still believed that an asphalt batch plant was inappropriate for the property. They formed an organization, Citizens Against Linscott/Interstate Asphalt, which moved to the next step: using the courts. They requested judicial review of the county’s decision.

As the issue moved from the county administration to the courts, arguments changed. The original argument was whether the asphalt plant was appropriate at the site. With judicial review, the arguments changed to focus on the county’s decision-making process. Had the county done all the law required before granting the CUP?

These arguments go back to the hearing where the original zoning change was made. Citizens Against says the county failed to provide adequate public notice for the hearing. The notice said only that land uses in industrial zones would be considered. In fact, changes to forest, agricultural and rural zones were also adopted.

The citizen group’s second argument is about the gravel pit where the asphalt plant is to be located. Under current zoning, this gravel pit is a “nonconforming use.” Gravel pits are not allowed in land zoned rural in Bonner County. But the gravel pit was there before the zoning code was in place, so the pit is allowed to stay as a “grandfathered” use.

Citizens Against points out that the code limits how much such a grandfathered use may grow. They say the pit has grown more than the code allows, so it is now operating illegally. Adding the asphalt plant would mean more illegal growth. The county argues that the asphalt batch plant is a separate use of the land. Restrictions on the growth of the gravel pit do not apply to the batch plant.

A hearing will be held at the courthouse in Sandpoint at 10 a.m. on Friday, Dec.13, to decide the issue. County residents interested in industrial uses of land in their neighborhoods may wish to attend.

Cate Huisman has lived in Sandpoint for nearly 20 years. Her interest in land use issues has grown out of more than a decade serving on the Sandpoint Planning and Zoning Commission.