When we swung and swayed

A recent New York Times carried the obituary of former big band vocalist Kitty Kallen. This, in part, is what it said: “Kitty Kallen, her voice sweet and clear, welcomed the troops home from World War II, singing ‘Kiss me once, then kiss me twice, then kiss me once again, it’s been a long, long time.’ She fit the classic image of that musical era: a gorgeous girl with a big smile, a perfect figure in a strapless gown, a string of pearls, a flower in her hair, swaying to the sound of a muted horn. Sweet but not too sweet, her voice conveyed romance without irony at a time when there was still mystery between the sexes and no embarrassment in being moved by a song about lovers’ dreams or the magic of a kiss.” 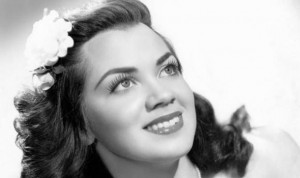 I was moved, unembarrassed, by many such songs back when the hormones kicked in during … during what? Junior High? Singers Kitty Kallen, Helen Forrest, Sarah Vaughn, Liltin’ Martha Tilton, Billie Holiday, Helen O’Connell, Peggy Lee, June Christy, Anita O’Day, Ella Fitzgerald, Rosy Clooney and Doris Day. They were angels. Angels who could activate a young lad’s testosterone merely by whispering, as Sarah did, “I get misty, just holding your hand…” Well, maybe angels is pushing it. But they caressed a song about lovers’ dreams and the magic of a kiss with so much conviction that many of those lucky enough to grow up to their music on 78, then 45, then 33 rpm records still worship their angelic voices today.

Same for their male counterparts. Frankie Laine. Dick Haymes. Buddy Clark. Sinatra. Nat King Cole. Billy Eckstine. The Ink Spots. Mel Torme. Johnny Mercer. And a promising youngster, Anthony Dominick Benedeppo. Our rock stars. Crosby was a rock star too, but our mothers’ rock star. So far as I remember, none ever felt compelled to trash a hotel room, smash guitars, start bonfires or grab their crotches on stage. No crotch-grabbing? You might be wondering, just how old is this writer, anyway? Well, on a recent morning I was enjoying a hot shower. Something felt different. Naturally, I was necked as a jaybird. Or so I assumed. Then I looked down and discovered I was still wearing my heavy winter socks. In the shower!

The first pop tunes I remember hearing on the radio and on breakable 78 rpm records were “Sweet Leilani,” by Bing Crosby, and “Flat Foot Floogie (with a floy, floy)” by Slim Gaillard and Slam Stewart. Late 1930s. After 1939 and the debut of “The Wizard Of Oz,” everyone’s favorite song was “Over The Rainbow.” Right before we entered World War II America was singing “Three Little Fishies (in an itty bitty pool).” And “heigh ho, heigh ho, it’s off to work we go,” which is what the seven dwarves sang in the new Disney film, “Snow White.” After December 7, 1941, super patriot pre-teens like me sang it this way: “it’s off to war we go. We’ll slap the Jap right off the map, heigh ho, heigh ho.” Crude today, but that was then.

Never has an era been so emotionally defined by its popular music as that of World War II. Also those uncertain, often personally precarious years right after it ended. Love, loneliness, patriotism, sentimentality, longing, fidelity, infidelity, fear, hope, plans. Memorable music about more recent war and peace has been delivered by Pete Seeger, Peter Paul and Mary, Joan Baez, Carol King, James Taylor, Bob Dillon and fellow troubadours. But the following songs lyrically revealed our collective soul as no body of pop music has, before or since. Here’s a sample:

“I’ll Walk Alone.” “It’s Magic.” “As Time Goes By.” “I Love You (for sentimental reasons).” “I Don’t Want To walk Without You.” “White Christmas.” “No Love, No Nothing (until my baby comes home).” “It’s Been A Long, Long Time.” And Miss Peggy Lee’s “Waiting For The Train To Come In,” which said it all: “I’m waiting at the depot by the railroad track, waiting for the Santa Fe to bring him back, waiting for my life to begin…waiting for the train to come in.”

Most of us, whatever our age, treasure a personal cache of meaningful, magical pop tunes. They seem to coincide with those years when the hormones began to kick in. When my first “steady” girlfriend, Mary Ann Hooper (15 going on 23) traded me in for a varsity quarterback and returned my massive ring which she had worn around her neck on a chain, it broke my heart. l sat around for weeks, brooding and playing two 78 rpm Decca records by The Mills Brothers. “After you, no one will do… no, no, not after you…” And “I’ll be around, no matter how you treat me now, I’ll be around, when he’s gone.”

As it happened, I wasn’t. By then I was going steady with Mary Ashcraft—a pretty, peppy, pom pom-shaking high school cheerleader with an I.Q, roughly twice my own. Our songs? Tommy Dorsey band vocalist Dick Haymes’ “Little White Lies.” “My Happiness” by Jo Stafford and The Pied Pipers. “Nature Boy” by Nat King Cole. And anything by Frankie (“That’s My Desire”) Laine and jazz master Billy (“Fools Rush In”) Eckstine.

I identify life’s decades by their music. Not just the 1940s, but every decade. When I reflect on the early ‘50s they sometimes seem like one unending songfest. At a California kids’ mountain summer camp where we were all on staff in 1950, crooning in a quartet with pals who became lifelong friends. “Paper Doll.” “Till Then.” “Daddy’s Little Girl.” We tried to sound like the famed Mills Brothers. Yes, and pigs fly. Later, belting out exuberant, around-the-piano anthems like “A Shanty In Old Shantytown,” and “Blue Skies,” with Air Force buddies in Georgia. And then with fellow collegians in California. That’s what the early 1950s were all about. No Senator Joe McCarthy witch hunts or cold war with the Russians for us. Cold beer and hot lyrics were our gig of choice. To wit:

“Mimi the college widow, taught all the boys anatomy.” And “Dirty Lil, dirty Lil, lived on top of garbage hill.” And “I’ll hug your flabby belly and I’ll kiss your greasy neck, but get off of me you sonofabitch, if you’re from Georgia Tech.” And “The verse is number three and my hand is on her knee, roll me over, lay me down and do it again.” And “It’s gin, gin, gin that makes us want to sin, on the Leland Stanford Junior farm.” And “When the game is over we’ll buy a keg of booze, and we’ll drink to California ‘till we wobble in our shoes.” And “The big black bull came down from the mountain, Houston, Sam Houston … he spied a heifer in the pasture grazing.” Etc. You get the idea.

My favorite carefree college-era aria was “Let Her Sleep Under The Bar.” “She wept a sad tear in her bucket of beer as she thought of the cold night ahead… when a gentleman dapper stepped out of the crapper, and these are the words that he said: her mother never told her, the things a young girl should know, about the ways of college men and how they come and go. Age has taken her beauty and sin has left its sad scar, so remember your mother and sisters boys, and let her sleep under the bar.” Not very hip or politically correct today. But I never knew of anyone raping someone, or being raped, at the colleges I attended. In 1954/55 our coed companions were as lyrically raucous as we were. Many, like my 1957 Cal-Berkeley bride, became school teachers. That’s why kids revolted in the 1960s and 70s. It wasn’t Civil Rights or Vietnam. It was the influence of raunchy college songs on their homeroom teachers. It warped them.

Like the Greatest Generation that immediately preceded us, my generation was moved by a song about lovers’ dreams or the magic of a kiss. We warbled lusty tunes with collegial abandonment. But we listened and danced to romantic pop songs with ardent reverence. Falling in love, hooking up, whatever, seemed less complex and more in earnest then. Before texting, sexting and Twitter. At least it appears so from here.

Many thanks, Kitty Kallen.