When David DaVinci visited his dentist on Tuesday morning, he was asked how long he’d been home.

Typically, DaVinci and his wife, Jamie Womach — originally of Sandpoint — call cruise ships, foreign countries and circus tours home most months out of the year. To put it into perspective, their four-year-old daughter Capri visited four continents before her fourth birthday. 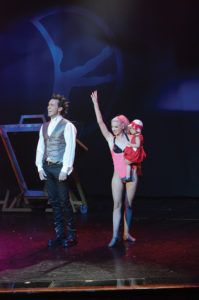 All of this globetrotting is thanks to DaVinci’s career as a “thrillusionist” — a thrill-seeking illusionist who uses his shows to let the audience live vicariously through his gravity-defying and shock-inducing experiences. Their act features elaborate illusions and trained exotic birds, just to scratch the surface.

DaVinci and Womach bring their act home to Sandpoint Saturday, Dec. 9, with shows at both 3 p.m. and 7 p.m. at the Panida Theater.

His fascination with magic and illusions began at an early age, he said, when his older brother received a magic kit for Christmas, a gift that sparked an interest in performing for others. Though he played sports, DaVinci said magic eventually became his primary passion.

“(Playing sports) wasn’t as fulfilling as taking out a magic kit and amazing somebody,” he said.

That’s exactly what DaVinci loves to do to this day. It was through one of DaVinci’s performances that Womach met him, and the two were married three months after she graduated from Sandpoint High School in 2004.

“When I met him, his life was already the show,” she said. “I just thought, ‘Well, he’s going to take some flexible, hot dancer on the road with him, or I could see if I could do it — so that was all the motivation I needed.”

Womach said that while DaVinci trained her in the beginning, she began seeking out advice from performers she met all around the world. As a result she learned many tricks to the performer’s trade, from makeup tips to how to keep your balance on a rocking cruise ship.

The duo, whose act is titled “David DaVinci – Thrillusionist,” has performed as illusionist and assistant for 13 years now, the last four in the company of their daughter, who is learning a few illusions of her own as of late.

Womach said she has made Capri a keepsake book for each year, complete with photos and inside jokes. When asked how they think their daughter will remember her childhood, the couple admitted that their daughter’s early life has been unique.

“Part of me is like, ‘This is awesome, the world is her school,’ but I also wonder if it’s overwhelming for a little brain and she won’t remember anything,” Womach said.

DaVinci recalls a recent trip to Africa when the family went to a whale show, but all Capri wanted to do was color in her coloring book because whales putting on a performance was nothing new to her. Another time, she told her classmates that her father walked tigers — which was true — and they didn’t believe her. Womach sent photos to Capri’s teacher so her classmates could see.

“Her perception of reality is as magical and enriched as it could possibly be as a little human,” DaVinci said. “My goal as a parent would be to let her see that anything is possible — not just believe it, but let her actually see.”

DaVinci said they aren’t sure when they’ll bring their act back to Sandpoint after Saturday’s performance, so they’re excited to give people a taste of what they do while they’re on the road. Both DaVinci and Womach admit that because they aren’t in Sandpoint often, they feel this show is a chance to “prove they exist.”

“It’s sort of like we are the myth,” DaVinci said, laughing.

Womach said she loved growing up in Sandpoint, so she’s grateful to raise her daughter here — at least part of the time.

“It’s a really good place to come back to. It always feels really good to be here,” she said.

Tickets for the Thrillusionist show are available at the door or online at www.panida.org/event/david-davinci-thrillusionist. Doors open 30 minutes before the show. There will be an opportunity to take photos with the birds directly after each show, so bring a camera.