A new face in food

Self-described “retail nomad” Sean Eakins is setting roots in Sandpoint as store director at Winter Ridge Natural Foods after 25 years of working in the food industry. 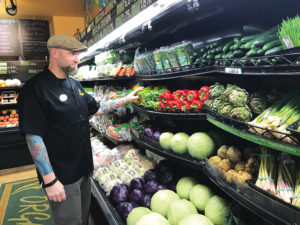 Sean Eakins in the produce aisle at Winter Ridge. Photo by Lyndsie Kiebert.

During his 18 years with Sam’s Club as a manager and “store fixer,” Eakins said he visited around 75 stores to help boost morale, balance finances and more.

He then had a change of heart and career. In his work today, he applies the people skills and business smarts he used at Sam’s Club to help natural food stores. He said it all began when he took over and meat and seafood market.

“That kind of put me on my journey of looking for more sustainable foods, foods that are healthier for you, foods that give back locally,” he said.

Since Sam’s Club, Eakins has worked with a number of grocers whose focus was keeping foods natural and local. Most recently, Eakins managed Bi-Rite stores in the San Francisco area. In need of a change of scenery, he applied when Winter Ridge sent out a national call for a new store director.

“It was a breath of fresh air, literally and figuratively,” Eakins said of Sandpoint. After visiting, he decided it was time to move to Idaho and leave that nomad lifestyle behind.

Eakins said he is impressed with Winter Ridge and is excited to help the business grow by listening to customer feedback, trying new things and working with local artisans.

“You can feel the community here,” he said. “My biggest thing coming here is bringing that community through food.”