For history buffs, there’s nothing better than watching history come alive. History will indeed spring to life on Friday, Jan. 11, with Living Voices’ production of “Our Revolution” at the Heartwood Center Jan. 11 at 7 p.m. presented by the Pend Oreille Arts Council. 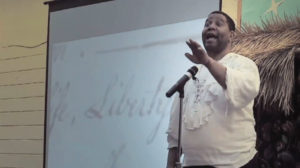 A still frame from a YouTube video of a Living Voices presentation.

Living Voices is a “living history” production company that takes important events in history and tells the stories from a unique perspective not normally covered in history books.

“They create a composite character based on historical figures,” said Hannah Combs, POAC’s art administrator. “For this one, they chose to share the experience of the beginning of the American Revolutionary War as told from the perspective of an African-American soldier.”

Combs said she was surprised to find out that there were anywhere from 5,000 to 8,000 African-American soldiers that served in the war.

“Their voices are never heard,” she said.

For “Our Revolution,” Living Voices chose to create a character by the name of Peter Freeman, a free man living outside of Concord, Mass. Freeman’s character is based on an amalgamation of other true characters, one likely as the historical person Peter Salem, a sharecropper who was enlisted into the Continental Army.

“The fact that they portray this character as a free man makes the crux of the story interesting, because a big part of the story is him hearing people speak about what they are fighting for,” said Combs.

Freeman examines the phrase “All men are created equal,” and attempts to figure out if that actually applies to him, or if it’s the hope that after much fighting, someday he will also obtain equal rights.

The format of the evening starts with a 10-minute lecture at the beginning with a video projector to walk the audience through basic facts and events. Half of the show is an actual performance, with an actor in a time period costume playing Peter Freeman.

While Friday night’s performance is open to the public, Combs said there will be five outreach events for schoolchildren to satisfy the educational component of this program. There will be presentations as Kootenai and Farmin-Stidwell elementary schools, student shows at the Heartwood Center, Clark Fork Jr./Sr. High School, Forrest Bird Charter School and the Waldorf School. Combs said POAC has also invited home schooled children and the Sandpoint Senior Center. The performances for these students are all free.

“I think the thing I love when we take the show to elementary schools is, for a lot of the kids, this is their first time experiencing a live performance,” said Combs. “It brings this story to life for them, much more than they would get if they just read it out of a text book. These are stories that aren’t often told, and they probably wouldn’t have access to these stories otherwise.”

Check out “Our Revolution” at the Heartwood Center on Friday, Jan. 11. Doors open at 6:30 p.m. and the show begins at 7 p.m. Tickets are $15 for adults, $5 for youth 18 and under. POAC would like to thank their sponsors: Bonner County Human Rights Task Force, Idaho Humanities Council, Taylor & Sons Chevrolet, Community Assistance League, Equinox Foundation, Idaho Community Foundation, Innovia Foundation, Ivano’s Ristorante and Sleep’s Cabins.