In these divided times, so many questions linger. What changes will Donald Trump’s first year as president bring to the country? Will the left and right wings of the United States ever find common ground again? And how many people will Lady Gaga piss off at her upcoming Super Bowl LI Halftime Show? 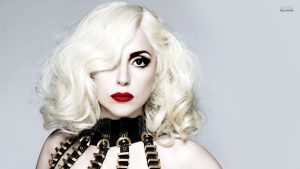 Ever the polarizing figure, Lady Gaga alienates some for her brand of heavily produced electropop and others for her often bizarre costumes and stage antics. What’s more, the artist is an outspoken political activist, a prominent Hillary Clinton supporter and a passionate advocate for LGBT issues. Following the election, the 30-year-old pop star famously turned out to protest at Trump Tower in New York City, a “Love Trumps Hate” sign in hand. The image was spread far and wide by both sympathetic anti-Trumpers and derisive conservative media outlets like Breitbart News Network.

Consequently, media coverage anticipating the halftime show has hinged on whether Gaga will use the largest stage in the world as a political platform. It’s a question that has even reached the multi-million dollar Super Bowl gambling business, where bookmakers have set 10-13 odds that the singer will make an anti-Trump statement.

Rumors are already swirling on whether or not the NFL is exerting creative control over Lady Gaga’s performance. On Jan. 17, Entertainment Tonight quoted an unnamed source who said the singer “was told by the NFL that she cannot say anything or bring anything up about the election, or mention Donald Trump.” The story quickly caught fire on social media, and the next day, the league went into damage control mode, virulently denying that it put any such restrictions in place.

“This is unsourced nonsense from people trying to stir up controversy where there is none,” NFL spokesperson Natalie Ravitz said in a statement. “The Super Bowl is a time when people really come together. Lady Gaga is focused on putting together an amazing show for fans and we love working with her on it; we aren’t going to be distracted by this.”

On the whole, Super Bowl halftime shows have usually avoided charged cultural commentary. When they rankle sensibilities, it’s more frequently over perceived breaches of decency. Most recently, the NFL and performer M.I.A. got into a legal tussle after the British rapper raised her middle finger during Madonna’s 2012 halftime show. The NFL demanded $16 million in restitution for the incident, which became known as “fingergate,” and the parties eventually settled in arbitration.

Other controversial shows included Michael Jackson’s crotch-grabbing in 1993 and Prince’s rather suggestive use of a phallic guitar design in 2007. Then, of course, there was the infamous Janet Jackson nipple incident in 2004, in which millions of viewers caught a glimpse of the singer’s bared breast after a “wardrobe malfunction” with Justin Timberlake.

As political angst intensified over the past few years, however, controversy shifted toward the ideological. Just last year, the NFL took heat from conservative circles for Beyonce’s participation in the halftime show alongside Coldplay and Bruno Mars. As debate raged in America over police violence against minorities, Beyonce  sang Black Lives Matter anthem “Formation” alongside her back-up dancers, who dressed in costumes referencing the Black Panther Party.

“I think it was outrageous,” Rudy Giuliani, former New York City mayor and now Trump’s adviser on cyber security issues, said on Fox News talk show “Fox and Friends.” “The halftime show I thought was ridiculous anyway. I don’t know what the heck it was. A bunch of people bouncing around and all strange things. It was terrible.”

With the election of Trump to the presidency and the tumult of protests that followed, it’s hard to argue that political and cultural tempers have cooled since last year. Under the circumstances, the Super Bowl LI Halftime Show, helmed by a performer with a penchant for shock and provocation, has the potential to be one of the more volatile entertainment moments in recent memory. The world will find out this Sunday just what Lady Gaga has in store.