Though we have both lived in Sandpoint over a decade, I just met Brian Casey last year. I adore him. Just being around him, I find that I can breathe slower and deeper. Hugging Casey is my feel-better-prescription, and time flies by while we yak. We get excited over saga-dramas like “House of Cards,” “Orange is the New Black” and “Game of Thrones.” Casey is musical, brilliant and humorous, with a supersonic wit, but it is his day-to-day bravery that makes him my hero. 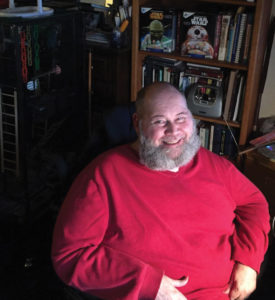 Brian Casey at home, who can often be recognized by his beaming smile. Photo by Jodi Rawson.

“I was born with muscular dystrophy,” Casey said. “There are a lot of different types, but most people are probably most familiar with ‘Lou Gehrig’s Disease’ or ALS. There is like 48 different types, and I have a rare type that weakens my arms and legs. I got my first wheel chair when I was about four. I have always had a wheel chair, it’s just kind of part of who I am.”

Monday through Friday Casey rides the SPOT bus to a local facility where he works with dementia patients. Born and raised in Salmon, Idaho, Casey obtained his Master’s Degree in Counseling and Psychology at WSU in the ‘90s, then began working full time.

“When I was done with school and moved back to Salmon I got a job offer,” he said. “They didn’t have any mental health services for children so the county put together a program through juvenile probation. I did counseling through probation and also through the child development center with younger kids for about six years. Then I opened my own private practice in Salmon for another five years.”

When Casey’s family moved to Sandpoint, he moved to a flat nearby. He loves the lake, the coffee and the art scene. “Sandpoint is where I first started working with the elderly population,” said Casey. “I got a job working with dementia patients and individuals dealing with traumatic brain injury.”

I respect his conservative upbringing and the fact that he has worked his whole adult life despite an obvious disability, but we don’t always agree on everything. I asked him to defend his political views, but he offered me this wisdom instead:

“The whole political thing,” Casey said, “the more I go over time I wish that we would remember that we are all Americans. We are always trying to divide things. We divide people because of political views, race and sexual orientation. They have kind of left disabilities out, for the most part, lately.”

“There is such a division all the time. I wish people would look more at how we could come together and make things work, rather than grab a corner and fight for it. Support and own your beliefs, but be open to others,” said Casey. “That is how you get educated.”

Never one to revel in his own challenges, Casey’s level of compassion is palpable. When we meet up in public I usually have to share him with strangers because of his gift of connective communication. He smiles at people and they open their life to him. Knowing how popular Casey is, I shouldn’t have been surprised when he told me he lived in a frat house.

“They had never had anyone live on campus all four years and graduate -they had people in wheel chairs live off campus and take classes, but no one like me. I didn’t realize it at the time and they were very supportive. If there was a classroom I couldn’t get to, they would move it or make whatever accommodations were necessary so I could take whatever classes I wanted,” said Casey. “The University of Idaho was an amazing experience!”

Casey had a wonderful childhood, free from bullying. “It is so sad to hear about kids these days that aren’t disabled, getting bullied on social media. People type and send messages they never would face to face. I never experienced any of that growing up,” he said.

“I attribute a lot of (my confidence and friendships) to the tight-knit small town of Salmon, but also to the way that my parents raised me. They never made (my disability) an issue or an excuse. It was the way it was, deal with it. I am grateful,” Casey said.