Bracing for an oil-train impact

At about 1 a.m. on July 6, 2013, a train carrying Bakken crude oil exploded in the town of Lac-Mégantic, Quebec. Minutes later, the town looked like something out of a post-apocalyptic disaster film. 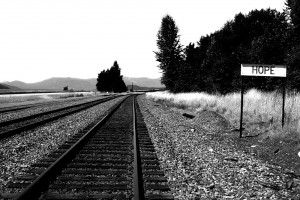 The tracks outside of Hope, Idaho. Photograph by Ben Olson.

Forty-seven people died. More than 30 downtown buildings were destroyed, and all but three of 39 surviving buildings were rendered uninhabitable from contamination. Smoke and fires raged throughout the site of the explosion. Reconstruction will take years and cost millions of dollars.

Local public officials and conservation professionals worry that a similar fate could befall Sandpoint, already an important route for energy shipments like coal and oil. All it takes is for one of those shipments to go wrong, and some officials worry that’s a matter of when, not if. That puts them in the uneasy position of bracing for an impact they’re sure will come sooner or later.

“It’s going to happen eventually in Bonner County where we’ll have to deal with some kind of incident,” said Ron Stocking, Sandpoint and Sagle fire chief. “Hopefully it will be a minor one.”

Last week, a panel of experts, including Stocking, City Councilwoman and Lake Pend Oreille Waterkeeper director Shannon Williamson, weighed in on the topic. Also present were Eric de Place, policy director at sustainability nonprofit the Sightlight Institute, and Jen Wallis, a freight conductor and co-chair for Railroad Workers United. Their message: Plan for the worst and hope for the best. To that end, the city and county have partnered on several emergency response plans should an oil accident occur in Sandpoint.

“Our priorities are life safety, property conservation and environment protection,” Stocking said. “That’s the order that we tackle the problem.”

According to BNSF officials, they take the dangers of oil transportation seriously. That’s why, according to a fact sheet, the company implemented several safety policies in 2014 and 2015, including  increased track inspections and safety technology on oil routes. In addition, train speed limits are lowered for crude oil shipments, including a 35 mph limit for cities with more than 100,000 people (Sandpoint, obviously, doesn’t qualify). Community engagement is also a large part of the company’s safety program, including paid emergency training for firefighters.

“To be fair to BNSF, they have been sending our firefighters to train to fight Bakken oil fires,” Stocking said.

When it comes to oil shipments, BSNF doesn’t have much of a choice, according to company spokesperson Gus Malone. Federal regulations require that they treat all shipments equally.

“We couldn’t say yes to tennis shoes and no to oil,” Malone said.

However, he said the company takes safety seriously. To that end, officials have implemented a range of safety enhancements, including more effective equipment, enhanced safety measures like new braking systems and up to 1,100 new additions to its fleet of locomotives. Careful planning, Malone said, has resulted in no fatalities along the northern tier—stretching from the Great Lakes through the Rockies to the Pacific Northwest—since 1980.

“Safety is our number one priority,” Malone said. “We’re going to continue to make enhancements and adjustments to maximize safety.”

However, de Place isn’t ready to take BNSF’s word for it. He cites almost one dozen incidents of accidents in the last couple years as evidence that oil shipments carry inevitable risk by their nature.

“The reason we are seeing so many derailments is because we are running so many crude oil trains,” he said.

Neither does de Place trust new safety measures as a reliable safeguard. He said re-engineered oil tanker cars and stabilizing processes like degasification have already proven unreliable at preventing accidents.

De Place is even more worried by what he sees as insufficient accident reporting. His research shows instances where anything from minutes to hours passed before derailments were adequately reported and appropriate emergency measures were taken. According to the Washington Utilities and Transportation Commission, BNSF allegedly failed to report 14 spills of hazardous material—including oil—for a total of 700 violations between November and February. De Place said BNSF admitted to 235 of those alleged violations.

While people like Williamson are already disturbed by potential train derailments, 11 proposed refineries and export terminals would boost traffic dramatically. According to Sightline Institute, “If all of the projects were built and operated at full capacity, they would put more than 12 loaded mile-long trains per day on the Northwest’s railway system. Many worry about the risk of oil spills from thousands of loaded oil trains that may soon traverse the region each year.”

Also of concern to Sandpoint is a BNSF-proposed second railway bridge across the lake, projected for construction in 2018 at the earliest. The bridge would require a public comment period before authorization if the U.S. Army Corps of Engineers requires a special permit, which Williamson said council members have requested.

“Since this project is so far afield, we don’t know what the Army Corps will do, but the request has been made,” she said.