Shelby Rognstad is the mayor elect and Memorial Field is getting new grandstands after a city election characterized by high voter turnout. 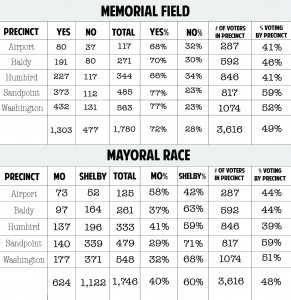 Here’s a chart outlining the numbers for the Sandpoint election. Most importantly, check out the fact that nearly half of eligible voters cast their ballot. Nice job, Sandpoint! NOTE: the above chart does not include the absentee ballots, which are factored into the numbers included in the news article.

The 1,788 Sandpoint residents who hit the polls constituted about 48 percent of total registered voters. That’s a relatively high turnout for local elections, which historically draws fewer numbers without a statewide or national hook. And it’s far and away better than the 2013 local elections, which brought in about 30 percent of registered voters. According to Bonner County Elections Deputy Clerk Charles Wurm, the high Sandpoint voter interest sharply contrasted an otherwise low turnout election in Bonner County.

Probably the most fiercely contested element of the election was the mayoral race, which Rognstad won with 1,126 votes versus Mose Dunkel’s 628 votes. Rognstad capitalized on years of involvement in city government to bring out voters. However, Dunkel energized an enthusiastic core of supporters with a campaign emphasizing government transparency and improved communication from City Hall.

“My opponent ran a strong campaign and I appreciated his commitment to keeping a positive message,” Rognstad said. “I heard his core message of increasing citizen engagement with the city.”

Dunkel, meanwhile, had some positive words for his supporters on his campaign Facebook page. He thanked everyone for their efforts on his behalf and encouraged them to stay interested and involved in local government. He believes the campaign was time well-spent in voicing his concerns and ideas.

“What an amazing turn out by the voters of Sandpoint!” Dunkel said. “While the outcome wasn’t in my favor I truly believe my voice was heard very clearly. I want to thank Shelby for being a upstanding opponent. Running for office is a huge undertaking and I have a lot of respect for anyone who stands up to take part.”

Dunkel aims to continue his involvement in public life. Since Rognstad must select a replacement to serve out his remaining term on City Council, Dunkel hopes he’ll consider his application.

“I have made myself available for the council seat that mayor elect Rognstad will vacate in January,” Dunkel said. “This way Sandpoint voters all can be represented at City Hall.”

Rognstad and Dunkel distinguished their campaigns with respectful and thoughtful public appearances and forums. But that didn’t stop ugliness from creeping into the process, most famously with a series of three robocalls that attacked Rognstad as anti-white and a “feminized male.” Both the Rognstad and Dunkel campaigns disavowed and condemned the calls, which are being investigated by the Sandpoint Police Department as potential election fraud.

“Some ugly elements from either inside or outside our community raised their heads during this campaign,” Rognstad said. “I hope that we can stand united as a community in rejecting those hateful messages.”

Second time proved to be the charm for the Memorial Field grandstands local option tax, which cleared the necessary 60-percent super-majority with 1,311 votes in favor against 477 votes opposed. This 1-percent tax on all taxable Sandpoint sales will fund the $2.72 million reconstruction of the grandstands and other Memorial Field improvements. After city officials collect the funds for the park, the tax will support other park improvements over its five-year lifespan.

“I’d like to thank everybody for their participation no matter how they voted,” said Sandpoint Parks and Recreation Director Kim Woodruff. “I’m excited about the outcome and ready to get to work.”

The local option tax was a measure of last resort for the grandstands. City officials been eking out a few final seasons out of the structure, which has run the risk of condemnation for years. Years of private fundraising efforts generated some money, but not enough to cover full project costs. New tax revenue will allow for redesigned grandstands featuring reduced maintenance costs, increased durability and expanded seating from 900 to 1,500.

The city previously proposed the tax in 2012, a measure that won more than 50 percent of the vote but failed to crack the 60-percent requirement. Now that the tax has passed, Woodruff has contacted contractors James A. Sewell and Associates to continue planning the design and construction schedule.

Finally, there were no surprises in the Sandpoint City Council elections, which saw incumbents Bill Aitken, Tom Eddy and Deb Fragoso running unopposed. Respectively, they took 1,267, 1,201 and 1,211 votes to the bank Tuesday night.