Bonner County filed an objection in district court Sept. 30 in response to the city of Sandpoint’s request for almost $94,000 in costs and legal fees accrued in the lawsuit between the two municipalities regarding The Festival at Sandpoint’s weapons policy.

Kootenai County District Judge Lansing L. Haynes ruled Sept. 2 in favor of the city, with a decision that detailed what the judge described as an “unpersuasive” argument by the plaintiffs — Bonner County and Sheriff Daryl Wheeler — that a ruling was necessary in order to avoid an impending and possibly violent protest at The Festival gates. 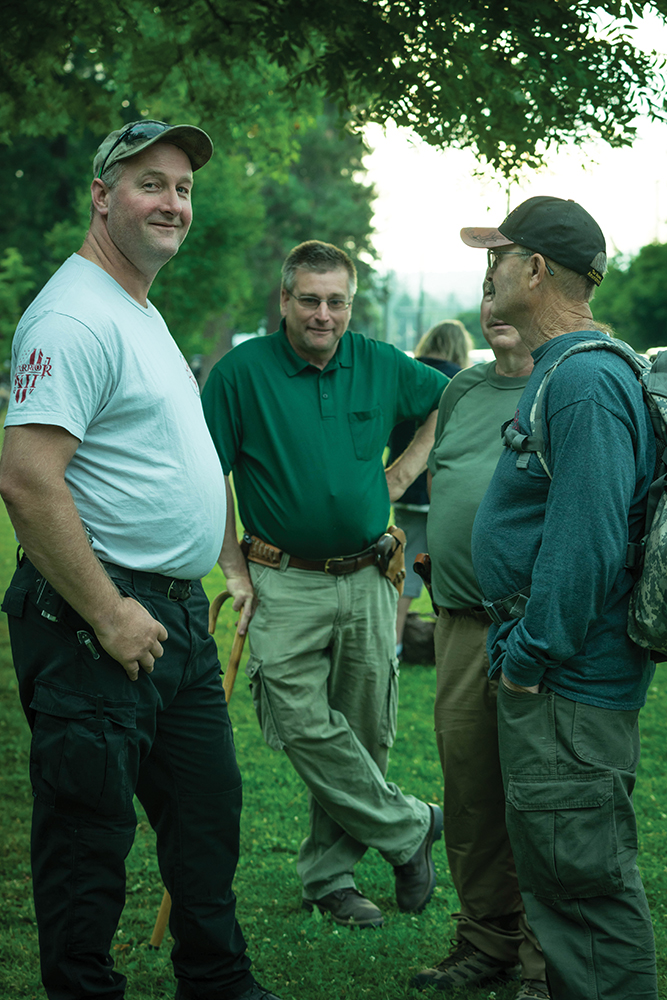 Unidentified individuals carrying firearms in Lakeview Park outside the Festival at Sandpoint gates in 2019. Photo by Racheal Baker.

“In actuality, law enforcement should always be equipped and trained for any crowd control eventualities, regardless of the reason,” Haynes stated in his decision. “Plaintiff’s fears of future harm are without merit and do not confer standing.”

The city filed a motion Sept. 16 requesting recovery of costs and fees from the case, and the county had two weeks to respond. In a statement on behalf of Bonner County emailed to the Sandpoint Reader, attorney Amy Clemmons of Davillier Law Group wrote Sept. 30 that while this suit may be settled for the time being, the issue as to the legality of The Festival’s gun ban is still in question — an issue set to rear its head again as a group of private citizens and gun lobbyist groups take the issue to court in a case scheduled for a February trial.

“In effect one player has been sent to the locker room, but the game goes on,” Clemmons said. “No one has won, and all parties lose if clarity on the law is not provided before the next Festival. Clear guidance on the law is the only thing that was sought in this suit to provide law enforcement necessary guidance before further injury occurred.”

The statement from the county’s counsel also asserted that “law enforcement officials from both the City and the County agreed that a protest and unrest are likely if the ban continues, and therefore, wanted the court to clarify the law.”

City officials told the Reader Sept. 30 that “city law enforcement officials have neither requested nor agreed that the court should clarify the law. The City of Sandpoint does not regulate the possession of firearms on public property. Furthermore, City law enforcement officials do not agree with Sheriff Wheeler’s assertion that there will be a protest and it is likely to turn violent or result in a riot.”

The county’s counsel also suggested that the city sought to postpone a decision in the declaratory action, rather than win on the merits of the central legal question: Whether a municipality can convey the power to regulate firearms on public property to a private lessee.

“The Sheriff received legal direction to use his discretion, and the City has not gained any ground on the fight to allow lessees to ban firearms, but it succeeded in opting to fight the legal battle at hand with the Second Amendment Alliance in lieu of Bonner County,” the county wrote in its objection.

The city pushed back at that assertion, as well, writing, “At no time has the City of Sandpoint through its legal counsel argued that the case should be postponed. In fact, the City’s position has been continually misrepresented by the County and its legal counsel.”

City officials said that “Bonner County officials were warned that they had no standing to pursue this claim,” and added that “the court’s decision to dismiss this case due to lack of standing was not a technicality.”

In the county’s official objection filing, counsel stated that Bonner County shouldn’t be “punished” via payment of the city’s legal fees for seeking legal clarification, which the county asserts the city will need to research and defend anyway in its other lawsuit regarding The Festival’s gun policy.

Further, the county’s lawyers argued that Haynes actually did provide clarity for the county. According to the county’s filing, “Sheriff Wheeler may exercise all of his options consistently with his view on the legality of the Festival’s gun ban, even if the correct view is not clear under the law.”

“[Th]ere is no clearly prevailing party,” the objection states. “The City’s Policy has not been found to be lawful and the statutory and constitutional challenge continues.”

Should the judge rule in favor of the city’s request for reimbursement,  that decision would push Bonner County’s price tag for the suit near $240,000 — the total spent to date on its own legal fees being $145,529.65, according to a records request obtained Sept. 18.

City officials told the Reader that they anticipate the court to consider its motion for financial recovery “in the next 30 to 60 days.”

“We look forward to the court finding in our favor for repayment of attorney’s fees and saving the City of Sandpoint taxpayers continued expense,” city officials stated.