Though it may seem like the conversation surrounding workforce housing is relatively recent, concern among businesses both big and small about lack of affordability and its effect on their employees has been increasing for years.

For Schweitzer Mountain Resort — among the highest-profile employers in the county — the time to take serious action on the problem came earlier this year. 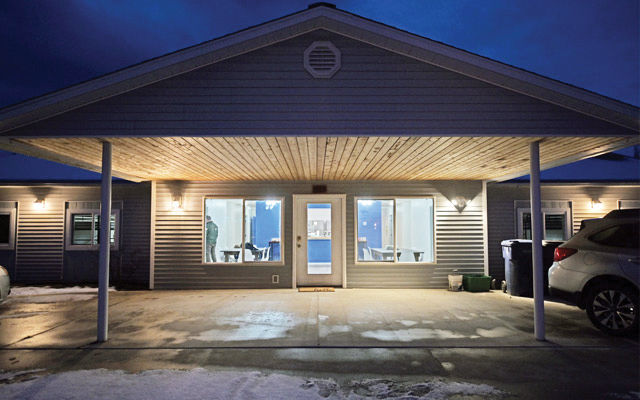 “At one point, I believe we had about five different managers or year-round employees in the company who in the springtime got notified by their landlords that either the house they were leasing or the condo they were renting was being sold out from under them or their lease price was increasing — in some cases almost doubling,” Schweitzer Human Resources Director Scot Auld told the Reader.

One manager, who’d been with the company for several years, had to leave the community — along with their spouse, who worked in the school district — finding that they just couldn’t make it work here with the extreme high costs of housing.

“Those sorts of things are happening and it really felt like a crisis at that time,” Auld added.

Feeling a strong sense of urgency to do something to ease the housing burden felt by employees, Schweitzer jumped on an opportunity during the summer to purchase the former assisted living facility at Hemlock Court in Sandpoint, fully renovating it to include eight bedrooms, each with their own half-baths and capable of accommodating up to two residents; four shower rooms; laundry facilities; a shared kitchen; and large living and rec rooms.

Dubbed Hemlock House, Schweitzer officials announced the opening of the employee housing project Dec. 14, with CEO and President Tom Chasse stating in a media release, “We believe this house, with its in-town location, will play a crucial role in helping our employees remain a vibrant part of the Sandpoint community.”

Schweitzer Marketing Director Dig Chrismer told the Reader the day after the opening that, “We’ve been working very hard on this issue behind the scenes for quite some time and trying to be really proactive, and I feel like a lot of those things are starting to fall into place. …

According to the resort, employees interested in living in Hemlock House will need to undergo an interview and screening process by human resources personnel, then sign an agreement pledging to follow house rules and get along with neighbors, housemates and their employer. Meanwhile, Schweitzer will maintain an on-site contact person to handle maintenance and other issues that may crop up.

Auld said the housing units will be reserved for seasonal workers — open for winter residency, then closed in the spring for cleaning and maintenance, filling back up with workers for the summer months and closing again for a fall-time round of preparations for winter.

“It really feels like a college dorm,” Auld said. “It’s going to be a better fit for someone who’s going to be living there for three or four months at a time.”

Many other local employers have expressed a desire to do something similar for workers but found that prices are simply too high — or that if a suitable property does come onto the market, it’s snapped up almost as it’s listed.

“There were a lot of other properties we looked at and had that same experience,” Auld said.

However, luck was with the resort — coupled with several key people keeping a keen eye on local property websites.

“We like to troll the real estate listings and sometime last summer we stumbled across [Hemlock House] and said, ‘We need to jump on this,’” Chrismer said.

Auld remembered that Chrismer and a few other colleagues notified him — “on just about the same day” — that they’d found what looked like a perfect site for workforce housing, and, “We were very fortunate to see that and we decided that it was time to make a move,” he said. “We had the willpower and the horsepower to make it happen.”

However, another potential challenge came with the renovation process itself, as local builders, contractors and tradespeople are booked solid for months. However, Auld said, when he told them that the project was to provide affordable housing for Schweitzer staff, “time and time again I heard, ‘Maybe I can get over there next week.’ I think this just goes to show that the need is known and people in the community are willing to go the extra mile to make it happen.”

Chrismer and Auld both credited Schweitzer Chief Development Officer Lance Badger with playing a key role in making Hemlock House a reality, in large part owing to his experience with resort development in other states.

“He was directly involved in making several other types of workforce housing and employee housing work in communities that are even farther down the gentrification pipeline than we are,” Auld said. “This can be done; there are multiple ways to do it, and if you don’t do it now it’s going to be even harder in the future.”

Hemlock House isn’t the last word in Schweitzer’s efforts to help provide housing for employees. Though unprepared to provide details at this time, Auld said there are “bigger projects that I’m super excited about” currently in the works.

“A lot of other options are coming into play,” he said, including looking at how to offer worker housing on the mountain itself.

“Long-term we’re going to have a mix of solutions that are at the resort, in the community; some will be aimed at seasonals, some will be aimed at year-round staff, some at managers,” Auld added. “It doesn’t just affect one type of employee — it’s something we need to address in a more holistic way.”

Get more information at schweitzer.com/schweitzer-life/press-room.