In the midst of the back-and-forth about the proposed Burlington Northern-Santa Fe Railway bridge project across Lake Pend Oreille, the company is touting a simple platform: safety. 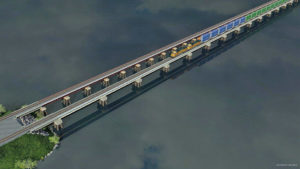 Rendering of the proposed second rail bridge. Courtesy of BNSF.

Wallace emphasized that the “bottleneck” in Sandpoint, where three rail lines combine into a single track, creates a “ripple effect” of stalled traffic not only on rail but also on roads with rail crossings.

“This doesn’t only affect Bonner County, but you have an effect into Montana, Coeur d’Alene and even into eastern Washington,” she said. “We need to address that, and we need to address it now.”

Wallace said that rail traffic will increase naturally over time due to demand. She said if BNSF doesn’t build the second rail bridge, “it won’t stop the traffic from coming.”

Wallace highlighted the different safety measures BNSF takes regularly — like track inspections, special technology to control trains remotely, warm bearing detectors and more — as well as the measures they’d take if a derailment were to happen over a waterway like Lake Pend Oreille. Plans for such scenarios are called geographic response plans, or GRP.

Wallace said BNSF has 4,800 feet of boom in Sandpoint in case of a derailment of hazardous materials, and has worked with local and state agencies to create a GRP with everyone involved.

Director of Bonner County Emergency Management Bob Howard said all involved agencies have practiced the derailment GRP currently in place for Lake Pend Oreille, and that BNSF was instrumental in making it happen both through funding and collaboration. 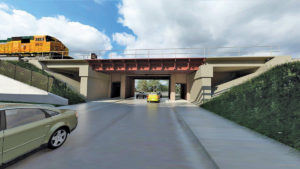 Despite this narrative of safety, organizations like Idaho Conservation League and Lake Pend Oreille Waterkeeper have been vocal in their desire for more information on possible environmental impacts to be made available to the public.

“The clean, cold waters of Lake Pend Oreille are … critical to our economy and way of life. One train derailment, like the one in Cocolalla last year, could jeopardize all that,” wrote ICL’s Matt Nykiel in a recent Reader op-ed. “It’s far better to keep our water clean than to clean it up after it’s polluted.”

The Idaho Department of Lands is holding two public hearings about the proposed bridge Wednesday, May 23. The first is at 8 a.m. at the Ponderay Events Center, and the second is at 6 p.m. in the Sandpoint Middle School gym.

At 5 p.m. the same day, Keep Sandpoint Rolling — a group in support of the proposal — will meet at the First Baptist Church in Sandpoint.