This past couple of weeks felt like a carnival ride, filled with hills and chills, and spills and shills. And per usual, when I feel angst, I feed my anxiety — not with eating but with cooking. Let me tell you, I was cooking my heart out.

I made myriad batches of brown-butter chocolate chip cookies to deliver to friends as get-well gestures or edible tokens of appreciation. I roasted marrow bones for broth and rolled pasta dough into long sheets before cutting them into wide noodles. I peeled, sliced, sautéed, caramelized and froze dozens of onions, ready for batches of hearty French onion soup or savory bread pudding. I whipped meringue a mile high for soft and gooey homemade marshmallows, and pricked and scored several pans of heart-shaped shortbread.

My kitchen (and a fair amount of red wine) brought me much comfort and, by gosh, so did the powerful and poignant Inauguration of our 46th president, Joe Biden, and our new vice president, Kamala Harris. We have accomplished much, folks.

I’ve been thinking a lot about another woman who also shattered a glass ceiling in the White House when she became the first family’s first female executive chef: Cristeta Pasia Comerford.  Chef Comerford began her culinary stint at the White House in 1995 and was promoted to executive chef by First Lady Laura Bush in 2005 (replacing outgoing Executive Chef Walter Scheib). Since then, the Filipino-American Comerford has served four White House administrations. I’d like to think one of her first official duties for her fifth first family was whipping up all those chocolate chip cookies that First Lady Dr. Jill Biden passed out to the National Guard — a tasty gesture of the Bidens’ thanks.

The “first chef” is both the personal cook to the family and the public chef for all official entertaining. Though they have many other chefs to assist them, the responsibility of the head job must be overwhelming. I was lucky enough to tour the White House, decorated for Christmas, in 2016.  According to whitehousehistory.org, every year since 1969 the White House has featured a magnificent gingerbread house that grows more ornate every year, weighing as much as 400 pounds. When I spied that elaborate, edible creation, I secretly yearned for a tour (or even just a glimpse) of the White House kitchen.

I’m also fascinated by culinary history; and, in my cookbook collection, is one written by René Verdon: The White House Chef Cookbook. Verdon, who was the White House executive chef during the Kennedy administration, played a pivotal role in introducing French cuisine to America. He was interviewed, in French, by First Lady Jacqueline Kennedy herself. (Mrs. Kennedy’s employment offer was turned down by my favorite French chef, Jacques Pepin). I love all the delicious, anecdotal tidbits served up in Verdon’s cookbook.

Other White House chefs have authored cookbooks as well: White House Chef: Eleven Years, Two Presidents, One Kitchen, by Andrew Friedman and Walter Scheib, and Dining at the White House: From the President’s Table to Yours, by John Moeller.

Several White House chefs (including Comerford) have a lengthy track record in the first kitchen, some staying as long as 20 years. The one with the shortest stint was Spokane-born, third-generation chef Jon Hill. According to The Washington Post archives, he was barely there long enough to wet his whisk. First Lady Nancy Reagan found his food and presentation to be disappointing and he held the position for fewer than six months.

Verdon, similarly, did not stay long after the first family of President Lyndon B. Johnson moved into the White House (I can only imagine what a contrast of palates that was to please). In fact, Verdon, who passed away 10 years ago, once told The Post, “You can eat at home what you want, but you do not serve barbequed spareribs to ladies in white gloves.”

In his book, I did learn that real men do eat quiche. According to Verdon, one of President Kennedy’s favorite lunch dishes was Quiche of Seafood Newburg, which the chef prepared often for the Kennedy family.

And talk about timing — Dungeness crabs are late this season but have arrived in our local markets. Buy a two-pound crab and have them clean it for you. It will yield just about the right amount of crab meat for this delicious quiche. A posthumous thanks to Chef Verdon for his original recipe, which I have adapted.

I don’t know what Chef Comerford will be cooking up for the Bidens, but I am sure it will all be delicious. I can’t wait for some recipes. Bon appetit, Mr. President. God bless America! 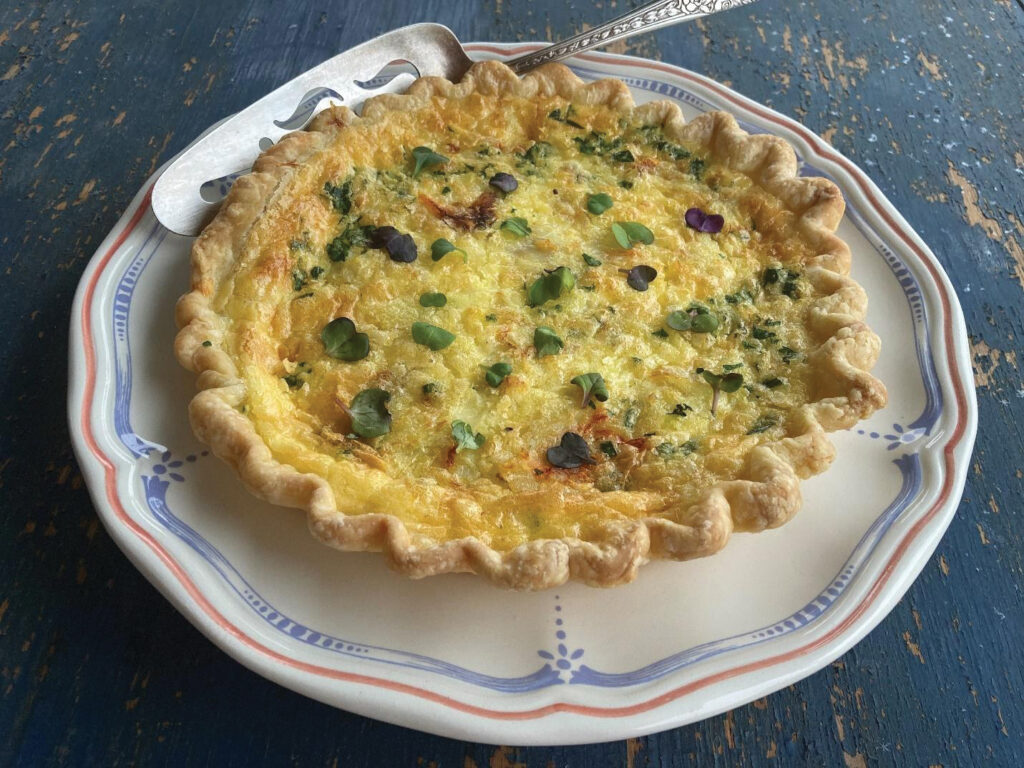 Perfect for breakfast lunch or supper, pair with a sparkling white wine. To keep crust from getting soggy, pour the leftover bit of egg whites (from the shells) into the crust and rub to coat entire crust.

Preheat the oven to 400 degrees Fahrenheit. Parbake crust for 10 minutes, remove and reduce oven heat to 350.

Whisk together the eggs, heavy cream, lemon zest, mustard, nutmeg, salt and white pepper in a bowl. Sprinkle the cheese evenly over the bottom of the pie crust. Top with the crab meat and sprinkle with the scallions. Pour the egg mixture into the pie crust.

Bake until set, about 40 minutes. Let rest for about 20 minutes before serving.