Amid breaking news about Russian attempts to sway American public opinion through social media, it’s becoming clear that Idaho was not exempt from its influence.

The Daily Beast reports that Russia-backed Facebook groups helped fan the flames of a Twin Falls controversy in which a sexual assault of a young girl was magnified by online news outlets into a gang rape at knifepoint by three Syrian refugees. Following the June 2016 incident and subsequent controversy, the group “Secured Borders” posted a Facebook event scheduled for Aug. 27, 2016, entitled “Citizens Before Refugees.” The event was later canceled and deleted, but The Daily Beast recovered a cached version of the page. 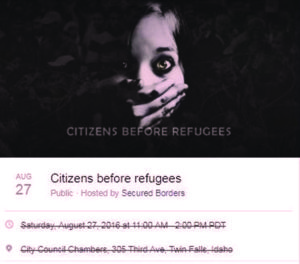 A screenshot of a cached Facebook page shows a canceled event set in Twin Falls, Idaho, that Facebook organizers confirmed was put together by Russian groups hoping to influence U.S. politics

“Due to the town of Twin falls (sic), Idaho, becoming a center of refugee resettlement, which led to the huge upsurge of violence towards American citizens, it is crucial to draw society’s attention to this problem,” read the event description.

“We must stop taking in Muslim refugees!” the description concluded. “We demand open and thorough investigation of all the cases regarding Muslim refugees! All government officials, who are covering up for these criminals, should be fired!”

On the event page, 48 people clicked the “interested” button, while four individuals confirmed they were going to the protest.

Secured Borders was revealed in March to be a Russian front, and by the time Facebook closed the group in August, it had 133,000 followers.

The Facebook group targeted Twin Falls following a series of refugee controversies popularized by right-wing internet publications including Breitbart News, WorldNetDaily and the Alex Jones website InfoWars. Breitbart in particular was influential in spreading outrage over the 2016 sexual assault. While three juvenile boys were sentenced for the crime this year, internet chatter exaggerated the crime into a gang rape at knifepoint by Syrian refugees.

“There was no gang rape, no knife attack, and we did not charge anybody with rape because no rape occurred,” Twin Falls County Prosecutor Grant Loebs told the Magic Valley Times News at the time.

Other rumors have centered around Greek yogurt maker Chobani. A popular target of famous conspiracy theorist Alex Jones, Chobani was accused of importing refugees into the Twin Falls community, who brought with them crime and tuberculosis. Chobani sued Jones for defamation, claiming $10,000 in damages. Jones later settled with Chobani and retracted his statements about the company and refugees.