Billionaires only began to exist around a century ago, starting with “oil magnate” John D. Rockefeller in 1916. Today there are around 2,500 billionaires, and they still skim the cream off of the earth’s resources. Billionaires also make money in patented inventions that are produced by sweat shop slavery. In Amazon’s case they have created a monopoly of resale, causing big boxes like Barnes and Noble to resemble “mom and pop” storefronts. 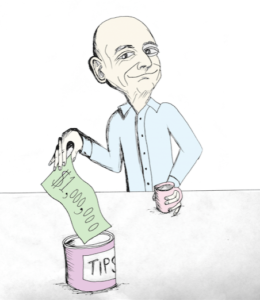 Jeff Bezos, owner of Amazon, nearly tripled his worth in the last few years, making him by far the richest person in the world. After his divorce is finalized, he and his wife MacKenzie (Amazon’s first accountant), will be the first and second richest people, worth around 70 billion dollars each, while Amazon laborers suffer back pain from hauling packages for miles in windowless warehouses.

I would like to hear about Amazon donating billions to the preservation of our “warehouse” of oxygen in the actual Amazon.

The wealthiest eight people in the world are worth more than half of the population. How can one person be worth a half a billion people?

Some billionaires are famous heroes. Warren Buffet and Bill and Melinda Gates make things happen with their money and have vowed to give even more upon their death, but is it heroic to still be a billionaire while giving billions? When servants, multiple homes, cars and vacations are held onto, what sacrifice is it, really, to have a tax write-off?

In the gospel of Matthew, Jesus notices the contrast in the offerings to the temple treasury. Rich people threw in large sums of money and a poor widow gave merely a few coins. “Truly I tell you,” says Jesus to his disciples, “this poor widow has put more into the treasury than all of the others. They all gave out of their wealth; but she, out of her poverty, put in everything — all she had to live on.”

Most billionaires are not so generous and well-loved. Their money is often spent lobbying for less taxes for the rich (like the estate tax) and less government involvement in big banking. While most of us were losing business, ownership and wealth in the early 2010s, big banks and billionaires were seeing their wealth skyrocket.

Nike Founder Phil Knight, Oregon’s richest person and the 28th richest in the world, spent over $3 million campaigning to unseat Governor Kate Brown. Brown, the first openly bisexual governor, was ironically endorsed by Nike for merely $85,000. Brown has talked about raising the corporate tax in Oregon (which currently brings in less tax than the lottery) and this would directly hit the wealth of Nike and Knight. Their products aren’t created in the U.S. and since the 1970s, Nike has been accused of overworking laborers overseas, in harsh conditions with little pay.

Royals and plantation owners from the 1800s would have been mad with jealousy. They were worth merely a thousand men! To put the disparity into perspective: When I give a homeless person $5, it would be like Bezos giving $50 million.

Are billionaires heroes when they donate millions, or are they just like me when I feel good about putting a dollar in the tip jar?