That’s the whole article, see you next week! 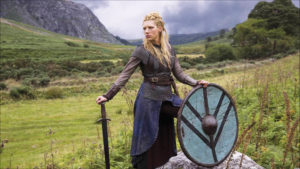 Wait, you wanted proof? All right. Women are the only gender that can build a living human being inside of them.

You want more proof? You don’t need any more, but I’ll give it a whirl.

We live in a primarily male-dominated culture, one that’s gone back for as long as we’ve learned hitting people on the head with a stick kills them and perpetuates the victor’s views. This neolithic mindset permeates just about every facet of our culture, and only now are we starting to fight against it. In America, at least. #MeToo, the Women’s March and all the female rage that has exploded within the past few years is not some new-fangled phenomenon. This is how women have felt since before we wore mammoth pelts as the spring couture 56,000 BC. Only now, through global support and communication, are women feeling empowered enough to speak up about how they’ve been treated by men.

That’s not right. This is something that should have been faced head-on a long time ago.

Now before you tell me to get off my judgy soap box, very few of us get off this totally clean. We all have some hard reflections to face at some point in our lives. I treated women I was acquainted with unjustly during my more youthful years, and I regret it to this day. For that, I sincerely apologize and solemnly swear I will do everything I can to help empower moving forward.

Moving back to the article, one of the best examples I can find of just how hard a male-dominated culture has put down women comes down to shieldmaidens. Shieldmaidens, according to much Norse folklore, were women warriors who dedicated their life to the sword. Some were vikings, some were in their respective nation’s armies. Shield-maidens went on to inspire the imagery of the mythical valkyrie. The psychology behind valkyries is pretty intense. As people lay dying in the field of battle, the last glimpses of life leaving them, they looked to women, almost in a maternal way, to protect them from the coming darkness. These maternal figures were also able to kick some booty and rode flying horses, so that’s pretty awesome-sauce.

Back to shieldmaidens, most archaeologists throughout history dismiss the idea of shieldmaidens being a thing for a few reasons. Despite women sometimes being buried with armor, weapons and showing stress fracture scarring on bones from swinging weapons, it is often assumed in archaeological fields that these were just typical practices, and the wounds were from chopping logs and doing other housework.

Even historical chroniclers that saw and spoke with shieldmaidens chastised them for “taking up the sword instead of a man’s embrace”. Granted, we can’t expect open-mindedness from 1056 AD. Catholic scholars given the times they lived, but it’s a good indicator of what we’re talking about here.

Personally, I think that shieldmaidens weren’t communes of fighting viking nuns or Wonder Woman-esque amazons. I think they were awesome women in a society that accepted them. Life was hard in the north, and if a hand could grip a spear, who would benefit from telling that hand no, just because of the gender it was attached to?

Let’s look into some other awesome warrior women throughout history.

Grace O’Malley was perhaps one of the most renowned, or infamous, female pirates in history. She was also the lord of west Ireland, and had the kind of stubborn temper you’d expect of anyone I’m probably related to. When scorned by her father as a lass and told she couldn’t sail because her hair would get stuck in the ropes, she shaved her head and sailed. When her father died and it came time to rule, she raided ships that dared pass her coast too closely. She even fought on and defended her ship a day after giving birth. If that’s not awesome enough for you, she also had the guts to stand up to Queen Elizabeth face-to-face. That takes guts, hereby referred to as O’Malleys.

A woman with real O’Malleys in our hemisphere was Lozen, Apache warrior and insanely benevolent person in general. In the late 1800s, her tribe was crammed into the most inhospitable corner of New Mexico the U.S. Army could find: “Hell’s Forty Acres”. Understandably PO’d, Lozen and her brother, Victorio, led a band of Apache warriors to raid everything around the reservation. Lozen would spare the women and children and lead them back to safety, shooting and riding like a legend all the while. She even fought with Geronimo, and not a lot of people can say that.

I want to continue, but I’ve only got so much space, so I wanted to dedicate a little bit here highlighting a woman warrior that’s alive now. We don’t know her name or rank, but we will someday. In 2016, the U.S. Army opened its special forces training to women, and so far, one woman has passed and is on track to become the first female green beret. You go, girl.

I’d like to conclude the article not with a funny joke or a self-depreciating taco-related quip, but a request: be better, be respectful. There’s this belief that masculinity is a zero-sum game, and to be the most masculine, most tough and manly, you have to tear someone else down.

I would like to think that just about every woman reading this article believes that the most masculine, macho guys are pretty darn sensitive, and rather than cut others down at the knee, lift others above the crowd.

Just my two cents, 7B. Have a great week!