There’s no end in sight to the ongoing bargaining between the Bonner General Health administration and its nurses.

Negotiations are going back to the drawing board after the nurses rejected a offer for increased compensation and other benefits. The sticking point centers on on-call staffing, a facet of hospital employment that has sharply divided the nursing staff and administrators. 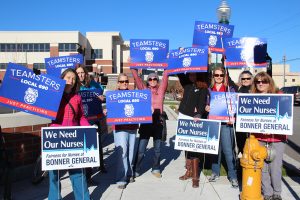 A group of supporters hold signs in front of the BGH Health Services Building in Sandpoint on Tuesday. Photo by Ben Olson.

“It’s not about the money,” said Val Holsterom, a spokesperson for Teamsters Local 690. “It’s about quality of life with forced overtime.”

According to Holsterom, on-call work makes onerous demands on employee time and energy. She said that full-time nurses could be on call for as much as four days a month on top of their regular three 12-hour shifts per week.

“You can’t plan anything, you can’t go anywhere,” Holsterom said. “Plus there’s the fatigue issue. We want our nurses to provide the highest amount of care and rest between shifts. They are supposed to serve the public to the best of their abilities.”

Patty Roop, a nurse at BGH for 31 years, said that on-call shifts are stacked on top of regular shifts and overtime, meaning that nurses could find themselves working during a scheduled six-day-off stretch. She can’t see a negotiating path forward if BGH administrators continue to insist upon mandatory on-call work.

“That’s going to hurt the hospital,” she said. “There are so many holes to fill right now, and the hospital is trying to squeeze these shifts out of the nurses that are left instead of being compensated and filling the hours.”

Hospital officials see things differently. According to BGH CEO Sheryl Rickard, nurses in the home health care and hospice and surgical services departments are already participating in on-call work, and BGH officials simply want that extended to the family-centered maternity unit and the emergency department. She said it is a commonly accepted obligation in the nursing profession.

“On-call nursing staff is essential to maintaining patient care with unpredictable demands and unplanned absences,” she said. “The purpose of scheduled call is to have specially trained, expert nurses available to come to work if the number of patients require additional nursing care.”

Another major issue in negotiation is employee compensation, which Roop said is between $12 to $14 behind other hospital rates. Holsterom said that’s led to employee retention problems at BGH, as employees decide to move to higher-paying positions outside the community.

“We want to keep our nurses here,” she said. “We don’t want them to go someplace else.”

This is the second time the nurses have voted down a contract agreement with the hospital, a process that has been ongoing for more than a year. Both hospital officials and the nurses and teamsters representatives are careful to note that the nurses are not on strike. In August, the nurses authorized the workers’ committee to declare a strike and enact strike benefits if deemed necessary in the negotiation process. However, Holsterom said that is an outcome that no one wants.

“Neither side wants to go on strike,” she said. “We prefer to get a settlement. I believe it’s the hospital’s goal as well.”