Aviation is soaring in Sandpoint

Aviation is taking off in Bonner County, playing an increasingly important role in its economy, with at least a half dozen entities providing solid jobs and exciting career possibilities for local people.

To track the latest developments in this exciting field, we talked to industry leaders at the Sandpoint Airport and at the major aerospace companies in the area. In the first of a series of articles, we take a look at the airport. 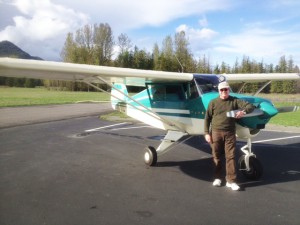 Improvements are definitely in the picture when assessing the future of the Sandpoint Airport (call letters SZT) which is seeing increased traffic. The County’s Master Plan for the airport forecasts operations totaling 33,930 for next year rising to 40,420 in 10 years.

While terrain and other factors—the airport is also constrained by existing streets, railroads and development—will not permit lengthening the current runway, or adding runways, plans call for adding a second (full) taxiway on the west side of the airport, which will help alleviate traffic flow. There are also plans to strengthen the current 5,500 ft. runway surface and substructure to handle increasing traffic and also accommodate heavier aircraft in the future.

“We need to grow to handle additional traffic,” says Jim Kaiser, director of Bonner County airports. While some of this growth is tied to operations at local firms such as Quest Aircraft and Tamarack Aerospace, Kaiser is also seeing an increase in transient aircraft traffic from throughout the U.S.

“However there are no plans to expand the area of the airport,” he points out, “The increased traffic will not increase noise levels, as newer aircraft engines are quieter and produce less emissions than older aircraft,” Kaiser said.

In his first year as airport director after a nationwide search for the position, Kaiser was a career Air Force officer, and served in Afghanistan and at the Air Mobility Command’s headquarters at Scott AFB, Ill.

Cost of the airport improvements are borne 90% by the Federal Aviation Administration (FAA), 7% by the county, and 3% by the state (a block grant for infrastructure improvements).

Kaiser also wants to upgrade the airports’ navigation/ approach capabilities—allowing aircraft to land with lower ceilings and in adverse weather conditions. The airport currently has DME (distance measuring equipment) and a localizer (providing lateral guidance on landing), but not a full ILS (instrument landing system) like those in use at larger airports.

And while he feels “the equipment we have now is OK, and we don’t expect to get a full ILS, we need the FAA to design and publish a ‘precision approach procedure’ that would allow landings using the aircraft’s own navigational  equipment.”

In addition to the Sandpoint Airport, Kaiser oversees the Priest River Airport, located north of the town, with a 3.900 ft. runway.

Andy Berrey,  who owns and operates Granite Aviation, the FBO (fixed base operation) also sees a growing number of airport-based  aircraft and air traffic increasing at the airport.

“Most of the jets that come in are charter (or fractural ownership) aircraft  like Netjets and FlexJets—‘time shares’ that you buy into,” Berrey said.

At least one corporate jet model is locally-owned: “At peak periods in July and August, you see four or five jets on the ramp or runway,” Berrey said.

Currently there are more than 100 aircraft based at the airport,  with 106 planned for next year.

“There are 47 hangars on the field now, with seven more to be built this summer,” said Berrey.

Both Kaiser and Berrey would like to see scheduled air carrier service in Sandpoint’s future. They point to the reason such service previously failed, particularly to West Coast cities, was failure to use pressurized-cabin aircraft needed to fly  “over the weather.”

Is there a reason (and perhaps it’s the same one that brings aerospace firms here) why air traffic to Sandpoint is increasing?

“Sandpoint is a unique town, it draws people,” said Berrey. “It is the town, the people, the outdoors.”