From his ‘happy little trees’ to his calm demeanor, Bob Ross is who we should all strive to be more like in today’s world

The world of Bob Ross was a gentle one. The famed painter — best known for his permed afro, his quiet demeanor and ability to paint one hell of a landscape in less than 30 minutes — is who we should all strive to be more like, especially during these divisive days of 2020.

Ross hosted the show The Joy of Painting that aired from 1983 to 1994 on PBS, but his influence has only grown as internet culture has embraced the gentle soul in everything from ASMR to meme culture.

Now, Hulu is streaming the last five seasons of The Joy of Painting, granting access to this incredible man’s talent and calm presence when we need it most. 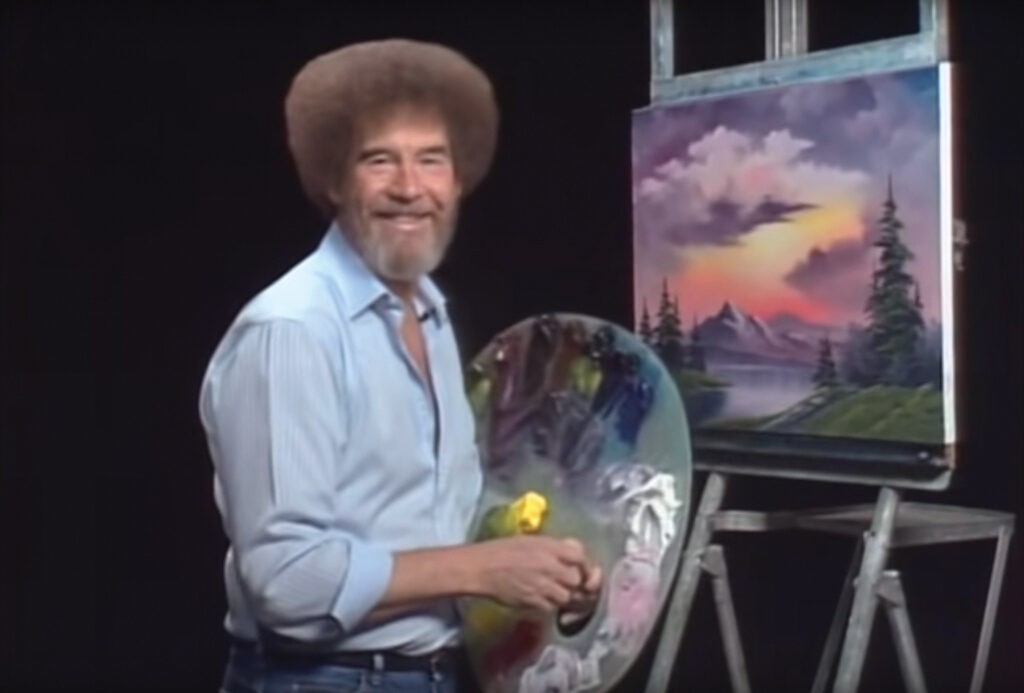 Bob Ross in his element, hosting The Joy
of Painting. Courtesy photo.

Ross was full of funny idiosyncrises. His timeless button-down shirt, jeans and signature afro and beard instantly gave viewers the impression that they weren’t dealing with an ego-driven artist, but a kind, talented man who only wanted to spread joy through his chosen art form of painting. The most aggressive Ross ever got on his show was to “beat the devil” out of his “two-inch bristle brush” after cleaning it — an action that always made him laugh as he thwapped it dry on the easel legs.

Leading viewers along on his journey, Ross created landscapes filled with “happy little trees” and “big ol’ mountains,” for budding painters who followed along at home on their own canvases. Whether viewers actually painted along or not, Ross’ show galvanized a huge audience that simply enjoyed watching him work and listening to his kind voice.

Ross grew up in Florida and spent his adolescence caring for injured animals like squirrels, armadillos, snakes and alligators. He enlisted in the U.S. Air Force and rose to the rank of master sergeant over his 20-year service career. He developed a quick technique to painting as a result of having brief daily work breaks — little did he know it would change the world of painting forever when starting his show a couple decades later. He was based in Alaska for most of his tenure in the military, which inspired many of the mountains, lakes, snow and log cabin scenes that he is known for.

Many compared Ross to Fred Rogers, the host of Mister Rogers’ Neighborhood, because they both exuded feelings of calm, acceptance and encouragement to their viewers that they could accomplish anything they wanted to if they only gave it a shot.

The Joy of Painting was ASMR, or autonomous sensory meridian response, before anyone even knew what that was. To have the ability to watch Ross create his works of art and talk to the viewer as if they were the only one in the room is stress relief personified.

“He’s sort of the godfather of ASMR,” Joan Kowalski, the president of Bob Ross Inc., once said. “People were into Bob Ross for ASMR reasons before there was ASMR.”

When asked once about his calm and relaxed approach on the show, Ross said, “I got a letter from somebody here a while back, and they said, ‘Bob, everything in your world seems to be happy.’ That’s for sure. That’s why I paint. It’s because I can create the kind of world that I want, and I can make this world as happy as I want it. Shoot, if you want bad stuff, watch the news.”

Looking back on his career from today’s vantage point, a person like Bob Ross likely couldn’t exist in today’s harsh world. Cruel internet culture probably would have skewered him and made fun of him relentlessly for his simple, easy approach to loving the world around you and creating art that was devoid of the struggles that dominate our modern era. I, for one, am glad he existed. I wish we could all be a little more like Bob Ross. Maybe then we’d realize that it doesn’t matter what political ideology we subscribe to or what god we choose to worship, because when you bring love to the table, you get it right back.

Tags: be more like bob rossBob Rossthe joy of painting