Everything about the world looks a little different when you’re a horror writer.

Even a day at the beach with the family can inspire ideas as the pebbles that children play with begin to look like human teeth. For T.J. Tranchell, any moment of any day can become a source of inspiration   under the right mindset.

Of course, Tranchell’s affinity for the macabre runs a little deeper than most. 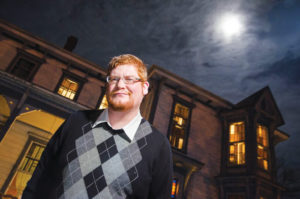 T.J. Tranchell, the author of “Asleep in the Nightmare Room.” Courtesy photo.

“There are people who say they are lifelong fans of horror because they first experienced it when they were 11 or 12,” he said. “Well, I was born on Halloween.”

The horror author is fresh off the publication of his latest book, a compilation of horror-themed short stories, poems, essays and articles entitled “Asleep in the Nightmare Room.” Inspiration for the book and its eye-catching title hit when Tranchell and his wife, Sandpoint native Savannah Tranchell, spent a night at his father-in-law’s house.

“We spent a night in the guest room (decorated) with the most horrific things you can imagine,” he said. “That sort of generated the title.”

The compilation came together gradually, as Tranchell found more and more pieces of work that fit within its patchwork of themes and tones. Those familiar with his work were quick to recommend additions to the compilation, and the project expanded from there.

“I strung all the short stories together, and it wasn’t long enough,” Tranchell said. “Then I added movie reviews. Then someone said, ‘Well, you wrote some poems, so why not put some poems in there?’”

According to Tranchell, the book is a stepping stone toward his next novel, which he hopes to publish next year. He is concurrently pursuing two different projects. One, a serial killer novel, is more developed. But he’s more excited about the second, a book about Mormon exorcists that has deep ties to his background and upbringing.

It’s been a long road for Tranchell as he’s worked on establishing a presence within the Northwest horror community. But his frequent appearances as a panelist and interviewer of fan-favorite horror actors and filmmakers at conventions like the Seattle-based Crypticon has helped build a readership.

“I not only get to be the person that people sometimes listen to, but I sometimes get to talk to the people that they paid to see,” he said.

Tranchell’s love of horror might be instilled from birth, but it’s also a passion that renews itself on a regular basis. That motivates Tranchell as he pushes forward into the world of internet-age publishing. It’s an environment where distinguishing oneself can be difficult, but it’s also brimming with creative control and self-determination.

“The good news is where I’m at in terms of the publishing industry, I’m more able to make things happen on my own,” Tranchell said. “I have more control over my destiny.”

Look for Tranchell’s books on Amazon.