Arnold Palmer, who passed away recently, was an American icon and a golfing legend. But he was also an accessible person who had movie star charisma but also played golf amazingly well. He also loved to fly, earning his pilot’s license at an early age, and later flew his own private or business jet aircraft.

I first met Arnie while working for United Airlines as a public relations manager in Atlanta. Palmer had been retained to serve as a spokesman for the company and agreed to serve as a good-will ambassador on United’s inaugural flight from Cleveland to Miami, with civic and business leaders and local news media included on the flight.

Palmer agreed, but wanted his private LearJet—which he flew himself at times, accompanied by his professional pilot—to be in Florida when he got there, to be used for future flights. But while Bill, his pilot, could take the LearJet down to Florida, he needed another pilot (a co-pilot) to accompany him. 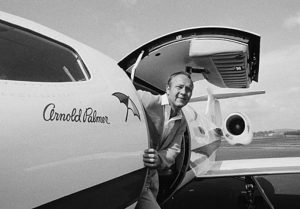 Arnold Palmer posing in his jet, circa 1960s. Photo courtesy of Creative Commons.

At a  planning session at United’s Chicago headquarters, it was suggested that since I had flown  in the Air Force, I could fly down to Florida as co-pilot on Arnie’s plane (I had a commercial pilot’s license at the time).

“I’ll be glad to do it if Palmer and his pilot agree,” I offered hopefully.

Next, I was on my way to New York City to meet up with Arnold and his pilot. Palmer used his LearJet to fly to and from golf matches from his Palmer Enterprises offices in Manhattan. His jet was kept at the Teterborough, N.J. airport.

Early the next morning, Arnold’s plane was on the tarmac, fueled and ready to go when we climbed in. I sat in back and Arnold in the pilot’s seat next to his co-pilot. Arnold was flying the plane from New York to Cleveland. After takeoff, the LearJet climbed like a jet fighter, and in a very short time we were through the overcast weather and in bright sunshine and blue sky.

After Arnold set his course for Cleveland and turned on the autopilot, Bill went back to make some coffee and invited me up to the cockpit to sit next to Arnold.

“Bill says you were an Air Force pilot,” Arnold said.

“I would have loved to have flown that plane,” Palmer told me.

We arrived in Cleveland an hour and a half later and were greeted by falling snow.

Arnold flew the initial approach, but his pilot took over the controls on the final ILS (instrument landing system) approach and for touchdown. After a perfect landing they taxied over to the airline passenger terminal.

After dropping Arnie off with the waiting group at United’s terminal, Bill taxiied the jet over to the business aviation side of the airport for refueling.

We taxied out and took off with me in the co-pilot’s seat.  When we reached cruising altitude of 45,000 feet (Bizjets normally fly at higher altitudes than commercial airliners) Bill said, “Go ahead and take it.”

I began flying the plane. It was such a light touch on the controls compared to a prop plane, I thought. It reminded me of flying the T-33 and F-86.

We made a smooth approach and landing at the Ft. Lauderdale airport, and even before we stopped, a limousine was beside the plane on the tarmac waiting to whisk me to the hotel where Arnold and the group were meeting. Arnold was greeting and talking with each member of the Cleveland delegation. After lunch, Arnold pointed out several of the nearby golf courses where they could play, and then he was off to practice for the Doral Open, one of the major tournaments of the day.

Before leaving in the waiting limo, Arnold came over to talk with me, asking how the flight had gone and how I liked his LearJet. I could hardly believe I was standing alone and talking with Arnold Palmer.

Note: A few years earlier, on June 18, 1960, the day my wife Pat and I were married in Denver, Palmer won the U.S. Open at Cherry Hills Country Club, just a few miles away, with one of his patented “Arnie charges.” It was the greatest comeback in U.S. Open history, erasing a seven-stroke deficit during the final round.