Attack of the little blue bugs

Step foot outside, and it’s impossible to ignore the swarms of flying insects, the menaces to bikers everywhere. They get in your hair, up your nose and generally annoy anyone unfortunate enough to stumble through their swarm. 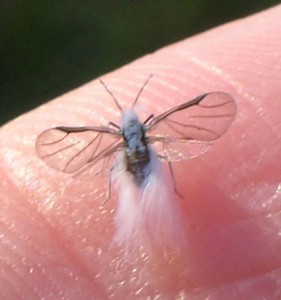 A blue ash aphid rests before flying directly inside your nostrils.

According to Idaho State Department of Agriculture Entomologist Paul Castrovillo, however, these pesky bugs are relatively harmless. They’re likely blue ash aphids, and while they’re around all year long, they’re only really noticeable for a few days in autumn.

For most of the year, these insects don’t have wings. For that matter, most don’t have male genitalia. A fresh generation of the critters hatch in spring to begin feeding on the roots of fir trees, eventually giving live birth to new aphids along the way. It’s only when the days grow shorter that they’re triggered to produce both winged aphids and males.

“I don’t know how exactly that works, but science is a mysterious and wonderful thing,” said Castrovillo.

Once the males show up, it’s time to swarm. The insects take to the air for a mating frenzy that ends with females laying eggs in the bark of ash trees. The new generation won’t hatch until spring, and once the swarm ends, most residents won’t even know the grounded aphids even exist.

“Mating season is very short-lived,” Castrovillo said. “It comes and goes in a matter of days or weeks at most.”