By Luke Mayville
Special to the Reader

Once again, it’s time to clear up some confusion about “Reclaim Idaho” and what we’re all about. 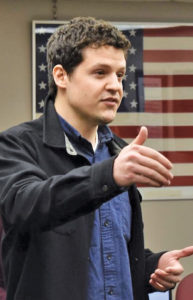 Two years ago, a few friends and I joined together in our hometown of Sandpoint to found Reclaim Idaho. Starting with a small group of friends and family in Bonner County, we eventually grew to a statewide movement with thousands of volunteers. We filed the citizens’ initiative to expand Medicaid and organized a successful signature drive. Last November our initiative received 61-percent approval from Idaho voters.

Our organization recently came under attack in an official complaint submitted to the Idaho secretary of state by Brent Regan, chairman of the Idaho Freedom Foundation. Regan’s complaint made the false allegation that Reclaim Idaho received the vast majority of its financial support from outside of Idaho while pretending to be a homegrown, grassroots organization.

Following a thorough investigation, the state elections director concluded that Reclaim Idaho did nothing wrong. A recent letter from the secretary of state’s office states that the investigation “did not identify any violations” and that the complaint file is now closed.

The conclusion of the investigation comes as no surprise to anyone familiar with our organization. Reclaim Idaho is grassroots to the core — we always have been and always will be. We began in North Idaho with a bright-green, 1977 camper (“the Medicaid Mobile”) and remain powered by thousands of small donations from ordinary citizens.

But the entire affair raises a larger question: Why did Regan file a frivolous complaint against Reclaim Idaho? Why is the IFF trying to tarnish our reputation as a homegrown, grassroots movement? In other words, what are they afraid of?

Ironically, it is well documented that the IFF itself is a “dark money” organization that refuses to disclose the source of its funds. According to a 2019 report by the Idaho Statesman, it remains a secret where the vast majority of the IFF’s money comes from.

In this respect, the IFF is not unique. These days, it’s typical for political organizations to raise mountains of money — much of it in secret — and then spend it on professional lobbying, high-priced communications and, in the case of initiative campaigns, professional firms that hire people by the hour to collect signatures.

Reclaim Idaho has a different approach. Rather than hire an army of paid petitioners to collect the signatures for Medicaid Expansion, we traveled around the state and engaged with passionate Idahoans who were willing to volunteer their time. We challenged them to form volunteer teams and become leaders in their communities.

For a professional team of paid petitioners to collect as many signatures as our volunteers did, it would cost at least $1 million. Reclaim Idaho spent less than $50,000.

But volunteers did much more than simply save the campaign money. By showing up at the doorstep and engaging their fellow citizens in genuine, face-to-face conversations, volunteers gave our campaign deep roots in communities all over the state.

It’s often thought that when it comes to politics, money is everything. A century ago, Ohio Senator Mark Hanna famously said: “There are two things that are important in politics. The first is money and I can’t remember what the second one is.”

That may be true for the IFF. But for those of us who still believe in the possibility of grassroots politics, there’s something way more valuable than money: volunteers. When ordinary Idahoans volunteer their time to a worthy cause, they can do things that money can’t buy.

That’s why Brent Regan and the IFF are attacking the reputation of Reclaim Idaho: Our volunteers are demonstrating that dark money is not the only game in town.