Last week, on an otherwise quiet Monday night, more than 40 people filed into the Gardenia Center to support a new nonprofit organization in Sandpoint: PFLAG.

The Sandpoint chapter of PFLAG (Parents and Friends of Lesbians And Gays) is one of over 500 chapters across the U.S. with an estimated 200,000 members and supporters. PFLAG’s main goal is support, education and advocacy for  LGBTQ communities. While it began as an organization primarily for parents and friends wanting to learn how to support their lesbian or gay loved ones, PFLAG has broadened in recent years to offer information and acceptance for those who identify as LGBTQ. 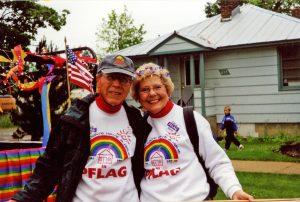 Barbara and her late husband Jim Hansen during a Sandpoint PFLAG event in the late 1990s. Courtesy photo.

President Jeff Bohnhof first became involved with PFLAG after moving to Sandpoint six years ago: “I had been keeping a pretty low profile, not sure how the town would react to the fact that I am gay,” said Bohnhof.

Bohnhof found that there was a Sandpoint PFLAG chapter that had disbanded. He began attending monthly meetings at the Coeur d’Alene chapter.

“I realized that I had finally found a group of like-minded people, and a place where I fit in and could finally be myself without the fear of judgment,” he said.

It was at these Coeur d’Alene meetings that Bohnhof became acquainted with some Sandpointians who were also in attendance. They talked about starting up a Sandpoint chapter again, and in January 2016, the national PFLAG office sent the official paperwork. Sandpoint PFLAG was born.

“Three years ago if someone would have told me I’d be the head of a nonprofit organization, I probably would have laughed at them,” said Bohnhof. 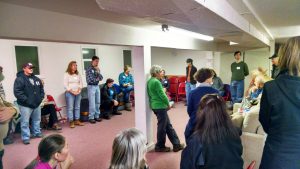 At Monday’s meeting, Eric Ridgway served as the official master of ceremonies for the evening, keeping the mood light with jokes and a round of fun games.

Bohnhof said the turnout was an unexpected success: “I owe a huge thank you to Mr. Eric Ridgway, who volunteered to facilitate the evening. With the things he has done in this community—from the Long Bridge Swim, to the contacts in the community he has—the evening was a huge success.”

Bohnhof said his “heart filled with excitement, pride and gratitude that so many people were willing to stand up and say that I want to support PFLAG and what it stands for.”

Sandpoint PFLAG plans to hold monthly meetings and plan special events such as family game night and LGBTQ-themed movie screenings at the Panida Theater. One event that has already gained support is the Drag Bingo fundraiser, a 13-round bingo game with performances in between each round from various drag queens and kings.

“If all goes well, in June 2017, we will be co-hosting Sandpoint’s very first Pride Event,” said Bohnhof. “PFLAG has a bright future, and we are always looking for new faces and fresh ideas. Everyone is welcome. Come and help us make PFLAG your organization.”

The next Sandpoint PFLAG meeting will take place Thursday, Dec. 15, at 6 p.m. at the Gardenia Center in Sandpoint. Meetings are free and open to all. For more information about Sandpoint PFLAG, reach them on Facebook at ‘PFLAG Sandpoint’ or call 208-718-2388.

The origins of Sandpoint PFLAG

The establishment of Sandpoint PFLAG isn’t the first time locals have worked with the organization. Eighteen years ago, a handful of progressive-thinking individuals started a Sandpoint PFLAG chapter to help educate parents and friends of lesbians and gays.

One of the founders was Barbara Hansen, who moved to Sandpoint with her late husband Jim two decades ago.

After spending a career in Illinois fighting against ageism, Hansen and her husband came face-to-face with the prejudice against homosexuality when they suspected one of their daughters might be a lesbian.

“We came from a strict Catholic home,” said Hansen. “I couldn’t even say the word ‘lesbian.’”

After some miscommunication, the Hansens finally had “the talk” with their daughter and, after finding that she was correct, Hansen said she was motivated to find out as much as she could about the LGBTQ community.

“She’s my kid, and by golly I love her,” she said. “When she said, ‘I’m gay,’ I saw this foot- thick glass window just shatter. I could reach her now. We could talk now. It improved our relationship.”

The Hansens began attending PFLAG meetings in Chicago, where they were overwhelmed with love and support. When they retired and decided to move west to Sandpoint, the Hansens met other members of the community that expressed interest in human rights, notably Dick Sandall and his partner, Jim Shirrell.

“We first met Barbara and Jim Hansen when we saw they were wearing a pin that said ‘I’m proud of my lesbian daughter,’” said Shirrell. “We struck up a conversation with them and, with Barbara’s help, we found there was enough interest in this area to start a group.”

The first iteration of Sandpoint PFLAG served Bonner County and extended areas, with around 30 members attending regular meetings. Shirrell said the highlight of the chapter was when they organized a showing of “The Laramie Project,” a play about the killing of gay University of Wyoming student Matthew Shepard.

“We had 21 people in the cast, which was unheard of,” said Shirrell. “We put on the production at the Panida Little Theater for three nights, and we saw a lot of support in the community.”

The chapter grew from there, hosting picnics and pride events.

While Shirrell said the feedback from the community has overwhelmingly been positive, there have always been detractors: “During a Fourth of July parade one year we had some people booing along the sidelines and giving us thumbs down, calling us derogatory names, but most were supportive. It helped bring awareness to the community.”

Shirrell said that kind of opposition is why PFLAG aims to educate and spread awareness: “People just don’t understand that we are who we are, that it’s a biological thing. It’s not a choice. If it were a choice, Dick and I would have probably chosen to stay married to our wives.”

Sandall said the biggest factor for the disbanding of Sandpoint’s PFLAG wasn’t a lack of community support, but support from actual members: “We reached a point where the same people were doing the same duties year after year and they needed a break. There was nobody to replace them. That’s why the original chapter faded.”

“We were really pleased to see the development of Jeff Bohnhof, who is president of the local group now,” added Shirrell. “We’ve gone by the wayside to let them find their own direction. I believe the Sandpoint chapter will do very well.”

When Barbara Hansen walked into the meeting last Monday, she was greeted with a warm round of applause. Several referred to her as the “PFLAG Momma.” Though just recently turning 87 years old, Hansen talks and acts like someone half her age.

“It’s exciting but humbling to have been one of those who helped plant a seed here,” said Hansen. “I am not the star of this show. The heroes are all those gay and straight allies who faced their fears and rejections and came out to support the fledgling Sandpoint PFLAG chapter as it struggled to become a vibrant entity in this community 18 years ago. Our motto was, ‘You always have a home in PFLAG.’ I truly believe that we provided a safe place when there was no other place to go.”