From graduate school seminars and cadaver labs to drawing tables, police cars and movie sets, Donna Cline has charted a one-of-a-kind course from her childhood in the South to a career in Hollywood to retirement in Sandpoint. Her career trajectory has also earned her among one of the most prestigious honors in the film industry, when in early 2022 the Art Directors Guild bestowed on her its Lifetime Achievement Award.

Rather than in front of the camera — or even behind it — Cline’s niche in the film business was as a technical adviser and storyboard artist. Even more unique than that, she brought a deep fascination and advanced academic training in human physiology to bear on film and television projects ranging from Tombstone, Dances With Wolves, Total Recall, Red Dragon and Outbreak to The X-Files and Bones, among many others. 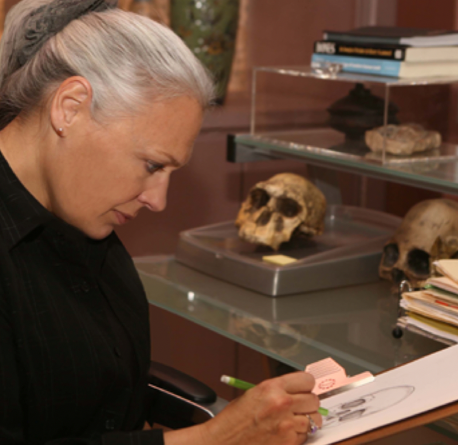 Cline at work doing what she loves. Photo courtesy ADG.

Along the way, she also studied and worked in law enforcement and psychology, but it really all began when she was a kid, fascinated with what went on inside complex systems.

“Since I was a tyke, I’ve always wondered how things worked and form and function issues,” Cline told the Reader. “It was a constant interest.”

As she grew up, that interest sharpened into the visual elements of the biological sciences. Cline studied botany, biology, and structures and functions of the natural world, but it wasn’t until earning a master’s degree in biomedical illustration that Cline found what would become her lifelong passion: human physiology.

Delving — literally — into the human body, from the cellular level to gross anatomy and organ systems, Cline merged that knowledge with her passion for illustration, and never looked back.

“I wanted to know what was inside,” she said. “Bodies are so complex. I really wanted to understand how it all functioned.”

Living in Southern California, Cline didn’t start out thinking her skills and education would result in working with some of the most notable filmmakers in the industry.

“I met some up-and-coming producers who were assistant directors and unit production managers in West Hollywood one night,” she said. “They said, ‘You’re an artist, so come meet our production designer, his name is Dan Lomino and he is just about to start the pilot of a TV show called MacGyver.”

Cline had some useful technical specialties and Lomino offered her the opportunity to shadow him on set. That experience led to Cline being hired to produce some technical images for director Wes Craven’s film Deadly Friend.

“I became friends with Wes and found that he was a great mentor,” Cline said. “Through Wes, I met a production designer, Bill Matthews, who was going to start the film Gross Anatomy for Disney and thought they’d probably really need some medical drawings of some sort. I wasn’t in the union, but I showed up at the production office and pretty soon they said, ‘Wow, you have a lot of knowledge. We need to get in and see human cadavers.’ I was soon hired as a storyboard artist and technical advisor and that was the beginning of my career in the industry.”

Film productions hire technical advisers for several reasons — usually to help the production present the most accurate portrayal of a specialized industry. Because of Cline’s skills as both an illustrator and expert on human physiology, Craven saw her potential.

From that chance meeting and subsequent mentorship with Craven, Cline’s career unfolded in front of her. She was soon in high demand; with one project wrapped, another production crew would come calling for assistance on the next one.

A highlight, Cline said, was her work as a technical adviser on Disney’s The Doctor, starring William Hurt.

“This was, with no doubt, one of the most demanding technical endeavors in the film industry with which I would be involved,” Cline said. “It is also the film of which I am most proud, due to the ethical and professional standard-of-care issues that were fearlessly addressed.”

In addition to technical advising, Cline’s artistic abilities landed her a number of jobs working on storyboards, which are like comic strips that directors use before shooting a film to plan out camera angles and shots. Often, Cline was hired as both technical adviser and storyboard artist.

“This led to my involvement on the feature film Mulholland Falls,” she said. “The director asked me to hire a technical adviser who knew about the LAPD in the 1950s, so I found a retired sheriff’s department captain named Bill Reed who actually knew all those old detectives who were part of the LAPD ‘Hat Squad.’”

Reed set her up with a ride along, and Cline found herself exploring a new facet of her career she hadn’t known was there: forensic artistry.

“I ended up going through the academy and becoming a reserve deputy for the L.A. County Sheriff’s Department,” she said. “I did all kinds of things, like riding with the mounted posse, working gang territory at night, working undercover a little bit and also as a peer counselor.”

During Cline’s stint in law enforcement, she was often at the county coroner’s office and told she had the “backbone” to be a forensic artist, which reconstructs human faces based on a variety of factors — including skeletal and muscular remains — as well as developing drawings based on eyewitness testimony.

Cline said some of the work in forensics proved to be emotionally and psychologically intense.

In one case, she said, “This teenage guy had seen his brother shot to death right in front of him. The detectives brought him to me at the station for a suspect composite interview just 10 hours after the murder. When he entered the room, it was like a tidal wave of pain walking in the room. I’m pretty tough, but when I left that particular composite meeting, his emotional pain stayed with me.”

After that case, Cline thought that if she wanted to develop as a forensic artist, she needed to know more about human behavior. She went back to school and earned another master’s, this time in marriage and family therapy.

“I loved the clinical skills, but this wasn’t the hardcore psychology I was craving, so I earned a doctorate in clinical psychology, which really gave me a much broader scope of knowledge,” Cline said.

“It was an unusual career,” she added. “You need to have a pretty thick hide to work in forensics. It’s safe to say that many who work in that field have a bit of emotional scar tissue.”

Cline’s introduction to North Idaho came when she was still working. Visiting some friends, “I got off the plane, drove up to the Sandpoint area and said, ‘OK, there’s something here,’” she said. “Not only that, I loved mountains, rivers, lakes – more than the ocean, really.”

She bought a home in the area in 2006 and longed to return to it — even just for a weekend. Once a long-term gig working on the TV show Bones concluded, Cline began thinking of retirement.

“I had that innate work ethic that dictates that you work until you’re carried away on a gurney,” she said. “But I did it. I moved up here full time in December of 2017 in the middle of a snowstorm, turned on the heat and didn’t look back.”

Looking back on her work in film and television, Cline was able to share her passion and skills with millions of people — all while avoiding losing her individuality in an industry filled with fakery.

“One time, while working on Bones,” she said. “I walked to the craft services table for some coffee and one of the craft guys looked at me and said, ‘You’re not really a film person, are you? You don’t get involved with all the politics and hierarchy stuff. It doesn’t seem to stick.’ I said, ‘That’s awesome you’d say that, but I’ve worked in this industry for 30 years.’ I told him that what he said was probably the nicest thing I’d ever heard in the business.”

In her retirement, Cline is an avid traveler, even checking off Antarctica from her bucket list. She works more in abstract art now, filling large canvases with highly textured modeling paste and incorporating Pend Oreille River glass. She has also practiced transcendental meditation for the past couple of decades and still sees a few patients from her psychology practice.