Preservation Idaho has awarded The MickDuff’s Brewing Company in Sandpoint an “Orchid” for Excellence in Historic Preservation for their recent preservation and restoration of the historic Federal Building. Building owners and brothers Mickey and Duffy Mahoney have a deep commitment to the preservation of historic architecture and how buildings can be given new life that continues to center around the community. The Excellence in Historic Preservation award is given to projects that have demonstrated outstanding adherence to the Secretary of the Interior’s Standards in preservation, restoration, renovation, or adaptive reuse (residential or commercial).

Mickey and Duffy Mahoney purchased Sandpoint’s Old Federal Building, located at 419 N. Second Ave. in September 2019. They spent the next 15 months restoring and preserving the building to the highest standards. The Old Federal Building is one of the most historic buildings in the area and was placed on the National Register of Historic Places in 2001. 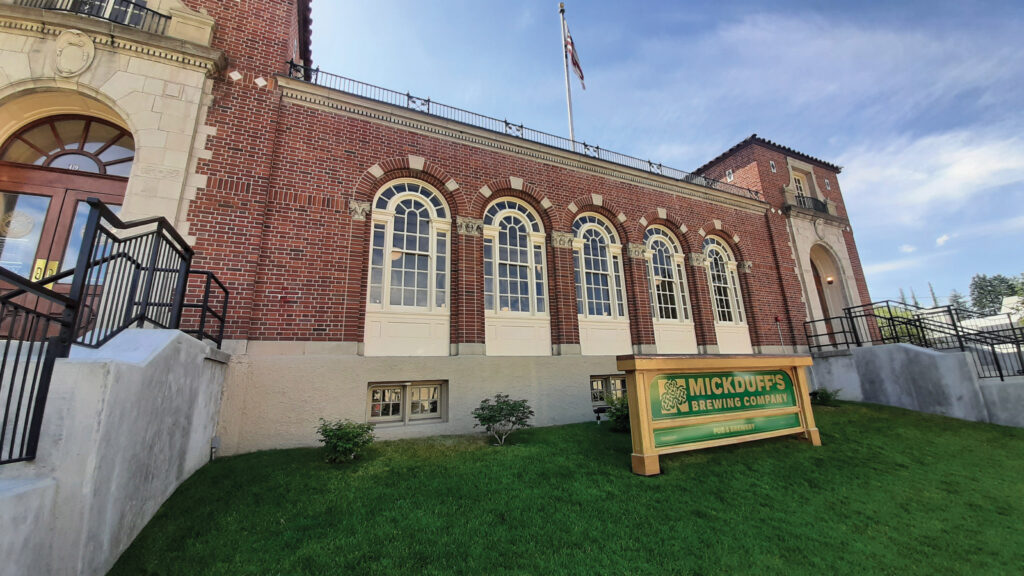 The exterior of MickDuff’s Brewpub, located at 419 N. Second Ave. in Sandpoint. Photo by Ben Olson.

When the building was completed in 1928, it housed the Post Office, Forestry Service, Civil Services, Internal Revenue, Agriculture and War Recruiting. In the late ’60s, the city of Sandpoint purchased the building and converted it into the city’s library. In 1999, the library moved into its new location and the building was sold to a private party. The new owner renovated the main floor and leased the space to the First American Title Company. First American moved when the Mahoney brothers bought the building.

The preservation and restoration completed by the Mahoneys was worthy of an award because of the time and effort that went into the lengthy project. The Mahoney brothers like to preserve rather than replace. It is much easier to replace building pieces with cheaper modern alternatives that are usually inferior in many aspects. Some of the necessary renovations included modernization — the Mahoneys tried their best to hide these modern additions. HVAC, electrical, sprinkler system, sound system and plumbing were installed, hidden in the catwalks and voids throughout the building. New floor coverings, paint colors, plumbing fixtures, lighting fixtures, bar, tables, chairs and booths, were all chosen because they matched the look of the late 1920s.

The window restorations, installing of interior doors that matched originals almost exactly, installation of door hardware that was missing throughout the building with used and new old stock, and replacement of the front stairs to match the 1928 originals while also being safe and up to current building code were alone worthy of an award.

The window restoration took nine months and employed at least four people. Most window sashes were removed and taken off site where they were stripped, sanded, repaired and painted. Rotten wood was replaced, broken glass panes were replaced and all windows were re-glazed. Window casements were stripped, sanded, patched and painted on site. When the restored window sashes were installed, new weatherstripping was added.

Three interior doors were missing when the brothers purchased the building. They hired local woodworkers to build exact replicas. One door replacement was even found and purchased from an architectural salvage company from the East Coast. The interior doors from the second story all have half glass. Over the years, many of the glass pieces were replaced with less attractive glass when they were broken. Mickey sourced and replaced the non-original glass with cross reed architectural glass that matched the originals.

Over the years, most of the basement door hardware was removed and used in other parts of the building. The Mahoneys spent countless hours searching the web for used and new old stock hardware. Now all doors have the correct hardware and are fully functioning.

When the community heard that MickDuff’s had purchased the building, many people voiced concern about the front stairs and their safety. The stairs were steep, and the rise and run were not up to code. At first, the brothers were apprehensive about replacing the original stairs but that soon changed once they learned the staircases were not original (thanks to the Bonner County Museum for providing photos of the original staircases). The Mahoneys’ architect drew up stair plans that matched the originals while following modern safety codes. A large portion of the renovation budget went into the replacement stairs.

An event to honor the award will be announced in early July.

Carrie Logan is a member of the Historic Preservation Commission and, along with fellow commission member Steve Garvan and Mickey and Duffy Mahoney, submitted the MickDuff’s nomination to Preservation Idaho.