No one knows Lake Pend Oreille School District quite like Tom Albertson.

The local educator has worked local classrooms for years, rising through the ranks from teacher to assistant principal to high school principal. With a vote by the school board last month, he takes yet another step up this month to district superintendent. Albertson is excited to serve local schools in a new position, and while there’s much work to be done, he sees a bright future ahead. 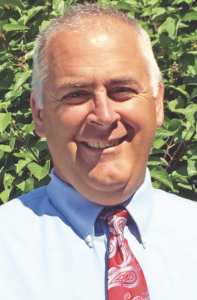 “I already know the great things Sandpoint High School students and staff can do,” he said. “Now I’m excited to work with all teachers and students throughout the district.”

Albertson was one of three finalists in the running for the job after previous superintendent Shawn Woodward was hired as Mead School District superintendent in Washington State. By happenstance, the position opening was well timed. Albertson had recently earned an advanced degree from the University of Idaho as an educational specialist, which qualified him for the job. It built upon the masters in educational leadership he earned a decade prior.

“I consider myself to be a life-long learner,” he said.

A firm specialized in educational leadership helped LPOSD officials narrow down the applicants to a final three. When Albertson made the cut, he began interviewing with the people holding the final stamp of approval: the LPOSD community. After a long day of questions from the public, the school board and stakeholder groups, he was offered the job.

Albertson had one advantage against fellow finalists Paul Peterson and Dr. Paula Vincent: he already knew the school district from the inside out.

“It certainly helped,” he said. “I’m familiar with the success we’ve had in Lake Pend Oreille School District, but as I say, we’re always on a path of continuous improvement.”

To that end, he intends to focus on the five priorities outlined by the school board: ensuring access to academic success for all students, engaging communities, utilizing resources efficiently and effectively recruiting effective personnel and establishing safe, effective learning environments.

The final objective — safe learning environments — presents the thorniest challenge for the school district. Several LPOSD facilities are old, creaky buildings near or beyond the end of their expected lifespan. Refurbishing or replacing those facilities will take careful planning and community involvement, Albertson said.

“There’s already been quite a bit of work done,” he said. “Instead of starting from scratch, we need to pick up where we left off.”

That means reconvening the 25-person facilities committee, for a start. The other major factor is getting into the community and building trust. Albertson said he intends to make that a focus of his leadership style.

In the meantime, he’s working with other leaders like North Idaho’s state lawmakers to forge a path into the future. Albertson believes there’s plenty of untapped potential for education in Lake Pend Oreille School District, and he looks forward to working with the entire community to realize it.