The city recently returned to managing downtown parking on its own with the hiring of two community resource officers. 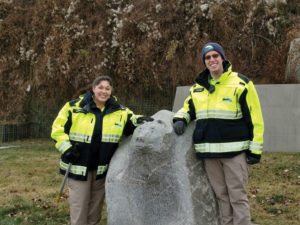 “In a larger sense, I think community resources officers really are ambassadors of the city,” Rognstad said.

The city was forced to let go of its original municipal enforcement officers several years ago due to budget shortfalls spurred by the Great Recession. With better economic times on the horizon, city officials decided to return to the original method of parking enforcement when passing the 2018 budget.

“Early on there was a lot of criticism of that decision (to let go municipal enforcement officers),” Rognstad said. “There was a lot of feeling Diamond didn’t have the same level of customer service and sensitivity compared to our in-house staff.”

The community resource officers will tackle more than just parking enforcement. They’ll also handle everything from animal control to business licensure to building code inspection. The added manpower will free up other city staff who were occupied with those tasks.

“(They’ll be able to handle) anything from a tree down on a sidewalk to a dog running loose,” Rognstad said.

Police Chief Corey Coon is happy to have the additions on the force. He sees it as a return to the small-town friendliness Sandpoint is known for.