Sandpoint Lions Club gearing up for the Fourth

The Sandpoint charter of the Lions Club has been helping the community of Sandpoint celebrate in our unique ways for more than half a century.

“On Independence Day, we give the community everything that happens on the Fourth,” said David Banister, newly elected Lions Club President. 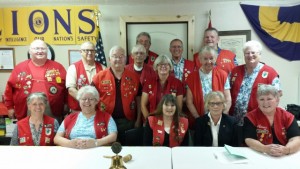 The festivities begin at 9 a.m with the Children’s Parade in downtown Sandpoint, followed by the Grand Parade at 10 a.m. The students of Sandpoint High School have been chosen to be grand marshals this year, with the theme of “Honoring American Heroes.”

At 2 p.m., the party shifts to City Beach for a series of fun kids’ games and activities.

“We give them all ice cream before we send them back to their parents,” said Banister.

Fiddlin’ Red will follow the kids games with music from 3 p.m. to 6 p.m., and then Frank Moore will play from 6 p.m. until sundown, both at the City Beach.

“We’ll sing the Star Spangled Banner and get ready for the fireworks show,” said Banister.

This year’s fireworks show, according to Banister, will be much longer than last year’s.

“This year the show will last for over 20 minutes,” he said. “Last year’s only lasted 10 or 11 minutes. We’ll have everything from the little stuff to the five-inch mortars this year. That’s about as big as they get.”

The length of the fireworks show is influenced by how much money the Lions raise with their various fundraising events throughout the year.

The main fundraiser is the popular raffle you’ve seen around town. First prize this year is a John Deere Gator, provided at a low price by Pape Machinery in Ponderay. Second prize is $2,000 in Bonner County money, which has to be spent with Bonner County businesses. Third prize is a pair of 2015-2016 season passes at Schweitzer Mountain Resort, one of which was donated by Schweitzer. Fourth prize is $1,000 cash.

“The tickets are five dollars each, or you can get a book of five for $20,” said Banister. “If you buy a book, you’ll get to spin the roulette wheel and possibly win another free book if you land on the right stop.”

The Lions will be selling the raffle tickets all the way up until the Fourth. Thursday they’ll be at Super 1 in Sandpoint, Friday at Yolk’s in Ponderay, and Saturday at the entrance of the City Beach.

Other ways that the Lions generate money include float registration for the parade. If you sign up before the 2nd, the price is $25 per float.

You can also pay the Lions $40 per year to erect an American flag at your home or business eight times a year for various federal holidays.

In addition to the activities on Independence Day, the money raised by the Lions funds a myriad of programs for the community. In spring, they host an Annual Easter Egg Hunt at Lakeview Park that draws over 500 children. They supply eyeglasses and vision testing to all the kids in school district 84 in Sandpoint.

“We tested 1,661 kids this year, with the exception of 90 percent of the kindergartners,” said Banister. “We also supply glasses and hearing aids to seniors that are living on a fixed income.”

In winter, the Lions hold their annual Toys for Tots drive, collecting around $50,000 to supply toys to over a thousand children in Sandpoint and Sagle, as well as food boxes to families that can’t afford Christmas dinner.

“Everything we do is community based,” said Banister. “We have no salaried employees. Everything that goes to Toys for Tots, if we don’t spend it this year, we’ll spend it next year. That’s how it works.”

Banister pointed out that the Lions are always on the lookout for new members, who can bring some new ideas to help streamline their existing events, or perhaps introduce some new ones of their own.

“We’ve come out of the Stone Age,” said Banister. “We have an email address, we’re on Twitter, we actually have a Facebook page and we’re updating it all the time.”
If you are interested in becoming a Lions club member, or would like to donate money or become involved in any of their programs, please call 208-263-4118, or visit them on Facebook.