It’s been a long-simmering conflict over the Festival at Sandpoint’s no-weapons policy — first bubbling up at a Sandpoint City Council meeting in August 2019 as Second Amendment activists pushed back against the concert series’ ban on firearms, specifically, which they argued violated both state law and the U.S. Constitution.

That complaint, spurred when area residents Scott Herndon and Jeff Avery were turned away at the gates of city-owned War Memorial Field because they refused to leave their guns in their vehicles, led to two lawsuits: one brought by Bonner County and Sheriff Daryl Wheeler, which Judge Lansing B. Haynes dismissed in September 2020 for lack of standing, and another from Herndon and Avery, supported by Boise-based gun lobby Idaho Second Amendment Alliance and the Bellevue, Wash.-based Second Amendment Foundation. 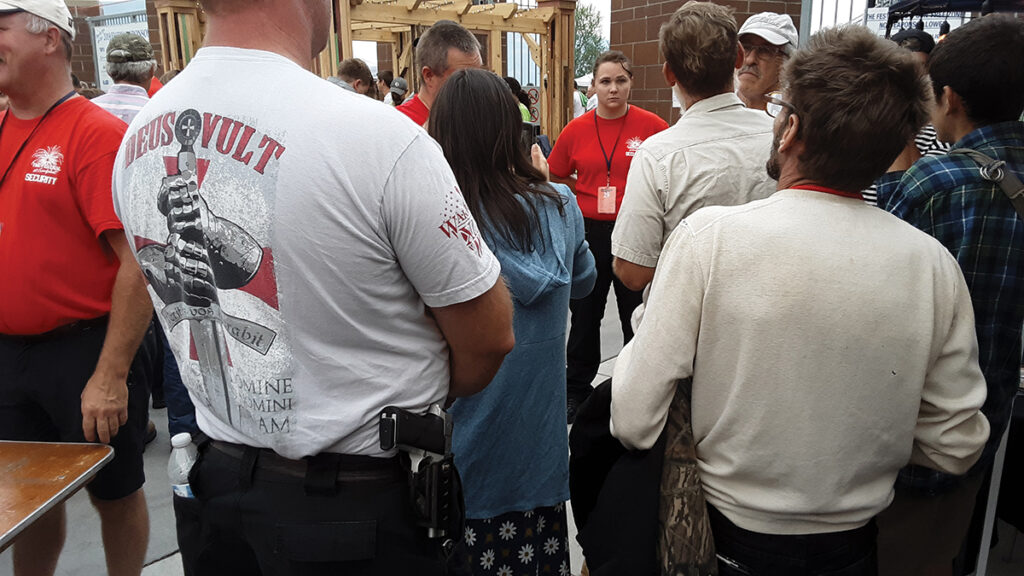 Scott Herndon and other Second Amendment advocates attempt to gain entry to the Festival at Sandpoint in August 2019. Photo by Ben Olson.

A request for comment to ISAA President Greg Pruett, who visited Sandpoint in September 2019 to spread the word on his organization’s then-speculative lawsuit and raise money for its potential legal effort, went unanswered. As reported at the time, ISAA raised more than $10,000 to retain a lawyer to fight the Festival’s weapons policy.

While the county’s case centered on public safety and sought legal clarity in order to coordinate the law enforcement response to a firearms incident at the field, the Herndon et al. case focused on whether the Festival — as a leaseholder — had the right to preempt firearms possession on publicly-owned property, which public entities are prohibited from doing per Idaho Code.

Haynes presided over the Herndon et al. case, as well, issuing his ruling June 1 that, “There is nothing in the lease to the Festival that is in any way an exercise in governmental regulatory authority. There are no genuine issues of material fact as to whether the city has promulgated any rule or ordinance in conflict with I.C. l8-3302J [the firearms preemption portion of state law]; likewise, no genuine issues of fact exist as to whether the Festival has violated state law or any constitutional rights of plaintiffs.”

Sandpoint Mayor Shelby Rognstad stated in a June 1 news release: “We are currently finalizing the permit with the Festival at Sandpoint for this year’s concert series and we look forward to the return of the Festival on the fully renovated War Memorial Field this summer.

“The Festival is an event our community and visitors look forward to each and every year and it is an important economic driver for our community.”

Reached for comment June 2, Festival officials told the Reader that while they’re glad the judge ruled as he did, they’re more focused on the upcoming concert series, which returns for eight nights of live music Thursday-Sunday, July 29-Aug. 1 and Aug. 5-8, after a one-year hiatus due to the ongoing coronavirus pandemic.

While the decision marks the end of the suit for now, comments from the plaintiffs hint that the issue is far from over. Attorney Alexandria Kincaid told the Reader that her clients are “considering all options, including cumulative remedies.”

“We may appeal this decision while simultaneously filing a new cause of action challenging the validity of the lease,” she continued in a June 1 email. “We are committed to continuing to challenge the erosion of Second Amendment rights in Idaho.”

Herndon also emailed comment to the Reader following the decision, stating that he will continue to stand with the other plaintiffs “in any appeals or other actions, as every single one of our team is committed to upholding the God-given right of protecting ourselves and our families and resisting any erosion of those rights as codified in the Second Amendment and in the Idaho Constitution.”

He said that if Haynes’ decision were “the last word,” then “preemption in Idaho means nothing, because, as this decision is written, any city or county in the state of Idaho could make a contract with a private party for any public property, public park, public sidewalk, label it a lease, and that private party can ban firearms on that property for the duration of the ‘lease.’”

Haynes wrote that his decision intended to “safeguard the orderly administration of justice, and … the dignity of judicial proceedings. It is intended to prevent a litigant from playing fast and loose with the courts.”

On the leaseholder powers argument, Haynes added that, “The fact that the leaseholder chooses to screen its attendees for firearms is a leaseholder prerogative and not the result of the city conveying the traditional governmental policing powers to the Festival. …

“The conduct of a music festival is in no way a traditional governmental function, and no evidence exists in this record that satisfies the public function test that would establish state action for defendants.”

Regarding the constitutional arguments fronted by the plaintiffs, Haynes said an appeal to the Equal Protection Clause, “fails as a matter of law,” and, “Plaintiffs have presented no factual basis nor legal authority to support that they are members of a suspect or quasi-suspect class to be afforded special scrutiny or protection.

“Moreover, there is no evidence in this record to support plaintiffs’ claim that the defendants had, as a motivation for their actions, the intent to deprive plaintiffs of any constitutional right.”

The city of Sandpoint confirmed in its press release announcing the latest court decision that Bonner County had reimbursed the city the $71,206.55 ordered by Haynes following the first lawsuit regarding the Festival gun ban.