When reading up on Runaway Symphony, those seeking a simple genre label risk being misled. The word “folk” may jump out, but upon listening to the multi-layered, dramatic instrumentation and captivating lyrics, the simplistic label makes less sense.

Runaway Symphony lead singer Daniel Botkin explains that the term “folk” can take on more meanings than the low-key acoustic music that comes to mind. 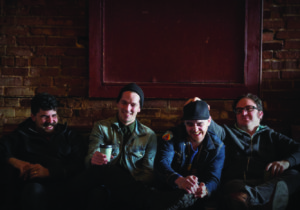 “The ‘folk’ aspect is in a lot of the storytelling,” Botkin said, noting a more accurate description may be ‘orchestral folk.’

Percussionist Jason Oliveira elaborates: “We really enjoy the fullness of an orchestra, and the intricacies of it. It’s something that you can just sit back and take in, and it lends itself really well to the idea of storytelling. There are so many different instruments that can put off different emotions.”

Storytelling is an obvious tenet of this band’s artistic philosophy. Oliveira said it’s a way to create an extra layer of meaning that will hopefully stick with the listener long after the song has ended.

“When you finish a song and maybe you click pause or something and you’re still thinking about it and reflecting on that, there’s something powerful there — just being able to sit there and stew on a line that really struck you,” Oliveira said. “If you’re (going to) create a more meaningful experience, that will happen with the lyrics.”

This is especially apparent on their 2016 album “American Blood.” The songs on that sophomore album — their most recent full-length release — “unfold like chapters in a novel,” the band said, weaving a sweeping commentary on “subject matter from postmodernism and the American dream to the Incarnation of God and the personal accounts of peers.”

Despite the connected nature of the tracks on “American Blood,” Runaway Symphony’s members — Botkin, Oliveira, Chris Lowe on guitar and AJ Stevens on bass — actually recorded their parts separately from the different cities they lived in at the time, then compiled the album remotely.

“There was a conscious effort to write something more cohesive, and I think that was just from growing as a band,” Botkin said.

Now, Botkin said the band is working on new material, this time together in Moscow, Idaho.

“It’s really exciting to be able to actually play stuff in the same room and come up with stuff in that more organic way,” Botkin said. “We have some new music that we’re working on, and we’re excited about it.”

“Some which may or may not show up in Bonners Ferry and Sandpoint,” Oliveira added.

Runaway Symphony will play two shows this weekend: Friday, Nov. 16 at 7 p.m. at The Pearl Theater in Bonners Ferry, and Saturday, Nov. 17 at 7 p.m. at The Heartwood Center in Sandpoint. The Pend Oreille Arts Council and Mattox Farm Productions are behind both shows.

“We’re particularly excited about this show because POAC hasn’t taken a performance to Bonners Ferry for many years,” said POAC Arts Administrator Hannah Combs. “Our mission is to bring arts education and experiences to the people of North Idaho, and while our education programs serve schools all over the area, we felt that we could do more to serve the public in the northern parts of the panhandle. It has been an honor to work with The Pearl Theater in the beautiful venue they have renovated.”

For Botkin, this weekend’s shows are a homecoming. Having grown up in Bonners Ferry, he said he’s excited to bring his music back to the most northern reaches of the state.

Tickets to this weekend’s Runaway Symphony shows are $15 for adults and $10 for those 18 and under. Purchase tickets online at artinsandpoint.org or at the door. Tickets to the Bonners Ferry show are also available at Bonners Books and Mountain Mike’s Health Food Store, and tickets to the Sandpoint show are available at the POAC office, Eichardt’s, Eve’s Leaves and 7B Bistro.