Mysteries of the deep – Part 2

The Pend Oreille Paddler: Fish story, secret stuff or creature from the deep?

The early morning light bathed the trees in light on the shores of the Pend Oreille River, and Kristoffer Solheim relaxed in the stern of his eight-foot rowboat. He hoped a Dolly Varden would nibble on his bait, but he wasn’t in a rush to land one. Only chores awaited him at the house if he came home, victorious, too early. He daydreamed of his record-breaking catch, gazing at the light playing off the water. Suddenly the ripples shuddered and broke his reverie. A dark shape rose to the surface.

“It had a bumpy back and was longer than the rowboat,” he remembered.

Up came his tackle, and his oars hit the water. He wasn’t going to tangle with “that monster.” 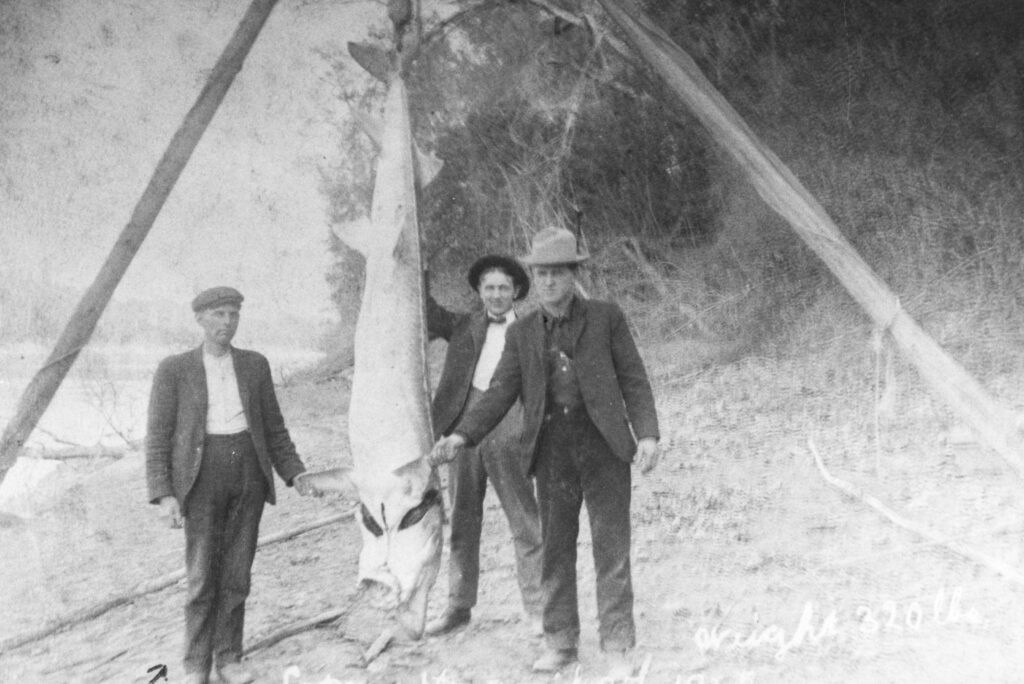 Reports of encounters with a mysterious creature of the deep started appearing in the early 1900s, when fishing from boats on the lake became as common as fishing from shore. For many fishermen sitting in small rowboats on top of an unimaginably deep lake, it didn’t take long for mystery and a touch of fear to turn into fantastic stories. Since the Big Hole, the nickname for Lake Pend Oreille, is larger and deeper than Loch Ness, it provides a canvas for locals and visitors alike to imagine the unbelievable.

Solheim most likely encountered a white sturgeon, a prehistoric-looking fish that can grow to be nearly 1,800 pounds, 20 feet long and more than 100 years old. White sturgeon prefer deep pockets of inland rivers where they migrate upstream to spawn, and rare occasions when they rise to the surface can be legend-making.

The creature may have dissolved into local lore as a big fish tale; but, starting in 1944, sightings of a monster serpent in the lake made its way back into conversation. Around the same time, the U.S. Navy had a vested interest in keeping the deep waters of the south end of the lake secret. Its consistent 39 degrees Fahrenheit water in the deepest parts of the lake provided perfect conditions for scientific research in building the quietest submarines in the world, and in a landlocked body of water, the Navy could easily control access to its base. At the Navy Acoustic Research Center, military researchers built, launched and tested scale models of submarines, torpedoes and rockets. (Which they continue to this day.)

During Farragut’s heyday, a civilian Bayview resident reported that, using his “spyglasses,” he watched a sea serpent move through the lake for 15 minutes. Other reports described a dark green, almost black, creature with shiny scales, moving with an undulating motion and creating a large wake in front of it. It’s possible that these sightings were of military submersibles, which would have looked quite alien to residents of the time.

For a while, there were few reports of sightings. Perhaps the Navy quashed them, or the K&K Fishing Derby had everyone focused on other big denizens of the Big Hole: kamloops, Dolly Vardens, cutthroats and schools of kokanee. Sightings trickled in, but had lost steam. Divers working on a railroad bridge reported seeing big objects underwater. The sonar company, Lowrance, tested their equipment in the deep and varied terrain of Lake Pend Oreille. Navigating between Trestle Creek and Anderson Point, they encountered “very large blips,” but passed them off as submerged logs. Strangely, the blips did not reappear on subsequent passings. The Lowrance employees conjectured there were very large fish swimming below 200 feet and weighing well over 200 pounds.

After a sighting in 1977, the creature was officially dubbed the “Pend Oreille Paddler,” which may have been a clever tourism hook more than anything. The name and subsequent cartoon renderings lent a benevolent characterization to the formerly unsettling sightings and spurred a renewed fascination with the creature.

Eventually, the monster-from-the-deep enticed a group from North Idaho College to undertake an investigative study. An English professor, James McLeod, and an anthropology/archeology professor, Richard “Duke” Snyder, tasked a group of students called the Cryptozoology Club to get to the bottom of the lore. They spent several months interviewing locals and chased down the origins of all documented sightings. Then they charted the various sightings on maps, designating fin sightings, submerged logs, boats dragged by large fish, large humps and powerful wakes caused by unknown sources.

Although spread throughout the lake, the majority of the pinpoints were from the Green Monarchs to Bayview, the deepest parts of the lake.

After three years of research, they reached a definitive conclusion: maybe the Paddler does exist. But the group also concluded that human nature tends toward storytelling and tales of the unknown. They also concluded that the Navy knew more than they shared since they operated in the deepest part of the lake for a long time.

Though the Navy kept quiet about its own doings in the lake, strangely enough, officials released their own report of an encounter — perhaps the most credible of all. While mapping the lake depths below the Green Monarchs, one of the government’s submersibles logged an encounter with something 30 feet long, alive and moving. An impossible length for even the most ancient of sturgeons.

On your next quiet morning on the lake, when the water is calm and the horizon is clear, look across the black waters. You might just see the Paddler greeting the dawn.